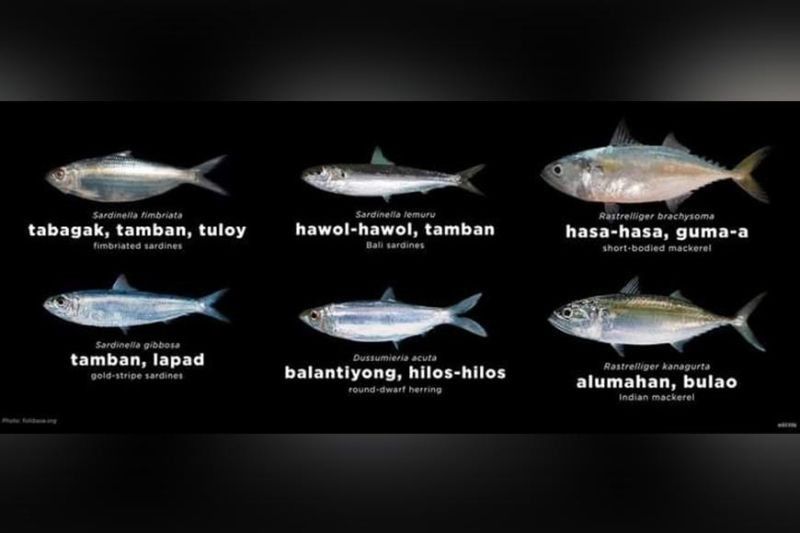 BACOLOD. Catching, killing, selling or possession of these fish are prohibited under the three-month closed season that started Sunday, November 15. (DA-Western Visayas photo)

CITING the need for the Visayan Sea to have the rest that it deserves, the Bureau of Fisheries and Aquatic Resources (BFAR) in Western Visayas has started to implement the three-month closed season in the area.

It provides for the legal basis in enforcing a spatial and temporal closure in the portion of the area.

The closed season is the agency's annual measure to allow the spawning of sardines, herrings and mackerels in the Visayan Sea.

It prohibits the catching, killing, selling or possession of sexually mature sardines, herrings (tamban/tabagak/tamban-tuloy/balantiong) and mackerels (hasa-hasa/ gumaa/bulao/alumahan) or their larvae, fry or young known locally as "lupoy," "silinyasi," "linatsay" or "manansi" in the portion of the Visayan Sea and adjoining waters enclosed by line drawn through following points and coastlines.

BFAR-Western Visayas Regional Director Remia Aparri, in a statement, said the agriculture and fisheries sector proved to be the most important during these trying times of the pandemic and natural disaster.

Aparri said these sectors provided and had kept providing us our primary need – food.

"The challenges brought about by the pandemic showed how vital the agriculture and fisheries sectors are. Through cooperation in conserving our seas, we can ensure that there will be fish on our table here in the region," she said, adding that "now more than ever, our seas need its rest."

Aparri said the challenges the country has been facing further motivates the BFAR to amplify its call that every person can and must take part in looking after the sea while it takes it much needed rest through the closed season.

"The closed season is the time for spawning so let us give them the needed time to grow. In the end, we will be the one who will benefit from this," she said.

The Visayan Sea, as a vast fishing ground, is surrounded by 33 cities and municipalities of the provinces of Capiz, Iloilo, Negros Occidental, Cebu and Masbate.

As a vital resource, it is home to hectares of corals, mangroves, seagrasses and marine protected areas.

The Department of Agriculture in Western Visayas said it is also vulnerable and threatened by cases of illegal, unreported and unregulated fishing and increasing marine debris.

"As stakeholders, we enjoin everyone to take part in Bantay Visayan Sea while it takes its much-deserved rest," it added.

Meanwhile, a P6,000 fine, imprisonment of six months to six years depending on the gravity of the offense, and forfeiture of the catch and cancelation of fishing permits or license await violators of the fishing ban.

Aparri earlier told SunStar Bacolod that the Visayan Sea is the center of marine biodiversity in the coral triangle.

She said the fish ban contributes to the protection and conservation of the country's marine resources.

The BFAR, through the closed fishing season, targets to increase the fish production at the Visayan Sea by at least 20 percent.

For Western Visayas alone, the annual production is pegged at almost 400,000 metric tons.