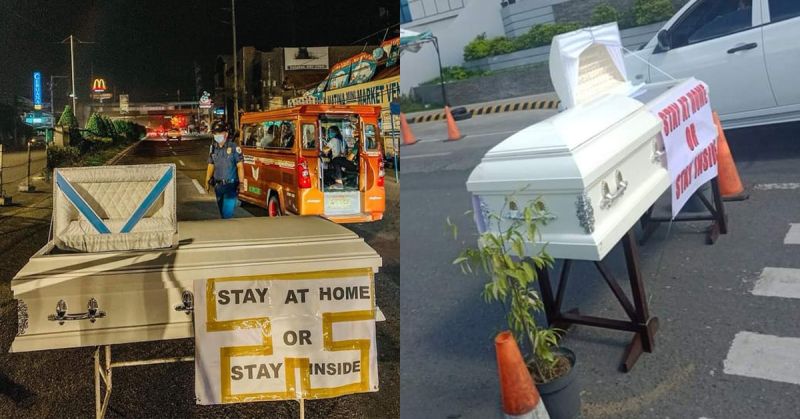 MOTORISTS and some netizens criticized the display of empty coffins along the major streets over the weekend, resulting in heavy traffic in some parts of Davao City.

The police authorities resorted to this strategy in a bid to discourage people from going out of their houses.

Motorists and netizens were not happy with this gimmick as this resulted in a traffic jam in the evening, hours before the curfew.

According to some netizens who posted photos of their situation, a lane was blocked by the coffins, causing congestion along some major roads in the city.

One netizen who works for an essential establishment, who requested anonymity, said he arrived home at almost 9 p.m.

(Instead of being able to reach home before curfew, I would have to endure the traffic they have caused. Now I would reach home late. I hope they would reconsider this as this had only caused traffic.)

Some netizens, however, also defended this move, saying people had been seen loitering along the streets for leisure and amusement purposes. With the coffins, the public would be discouraged from going outside.

The coffins were mounted a day after the city issued two executive orders, reimposing the food and medicine (FM) pass and prohibition of non-essential travels, and the declaration of the city as a restricted local government unit.

Davao City Police Office (DCPO) Spokesperson Captain Rose Aguilar told SunStar Davao in a phone interview that the coffins were now removed following the complaints and not to further cause traffic.

Aguilar defended the mounting of the coffins as another strategy in reminding the public that the pandemic is a serious concern.

She also said this is also a “strong message” to the public that the city is still under a modified general community quarantine. Therefore, the public must stay at home and only go out for work, business and accessing basic goods and services.

Aguilar said some had taken advantage of the city’s current quarantine status, resulting in the continuous surge of cases brought about by mass gatherings and non-essential travels.

Mayor Sara Duterte-Carpio also denied that the city government is behind this, although she also defended DCPO’s action.