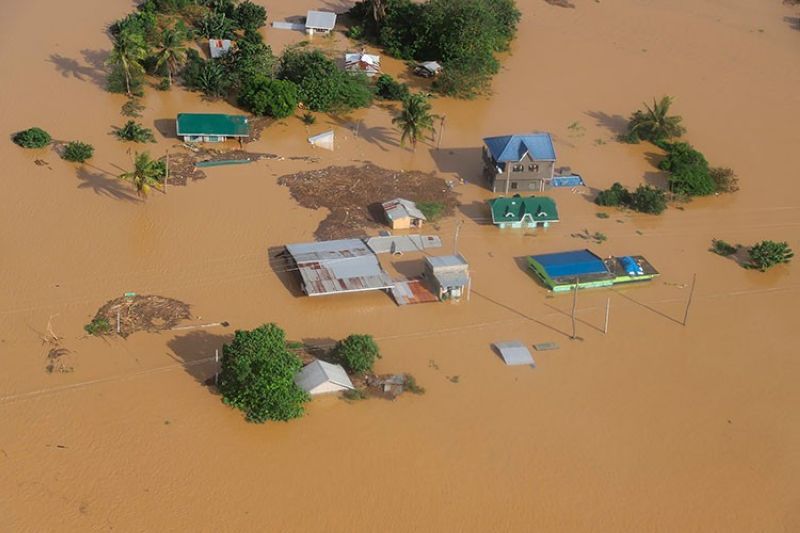 CAGAYAN. In this photo provided by the Philippine Coast Guard, houses are submerged in flooded areas in Cagayan Valley on November 14, 2020. (AP)

CAGAYAN Governor Manuel Mamba said Tuesday, November 17, that they are studying the possible filing of charges against the National Irrigation Administration (NIA) over the heavy flooding in the province caused by the release of excess water from Magat Dam.

Mamba said his constituents are calling for the filing of charges against the NIA, which approved the release of the water from the dam.

The release of water was blamed for the massive flooding that sank most part of Cagayan, affecting thousands of families on November 12, a day after the onslaught of Typhoon Ulysses.

Mamba said they are not certain if they could win the case.

"We will have to study this with our legal team just to effect change and for them to come up with... ang sinasabi ko kasi puwedeng hindi nila sabayan eh 'yung paglaki ng Cagayan River. Hindi naman maliit 'yung nare-release," he said in a television interview.

"Sinasabi ko nga po there should be a medium-term and long-term plans to mitigate or even prevent these things to happen and worsen. Our problem on flooding is worsening every year. Kung nasabayan lang kami ng malakas na bagyo at nagkaroon ng uprooted trees that came down with water, pati 'yung Buntun Bridge, nadali na," he added.

NIA Administrator Ricardo Visaya said on Monday, November 16, that if they did not release the dam water, it would spill and cause breakage, which is more dangerous to the public.

He maintained, however, that they have advised the public and the local government units about the impending release of the water.

Visaya said they are ready to face any charges that will be filed against them.

Vice President Leni Robredo has expressed support for the conduct of investigation on the incident.

But Presidential spokesperson Harry Roque expressed doubt that such a case would prosper.

"I have serious doubts if it will prosper," he said in a televised press briefing.

"Number one, it really is a valley so talagang ang tubig papunta diyan and a scientific study has already concluded na ang primary reason for these flash floods: deforestation, illegal mining, and the contour of the river itself plus the fact that it has to be dredged," Roque said. (SunStar Philippines)