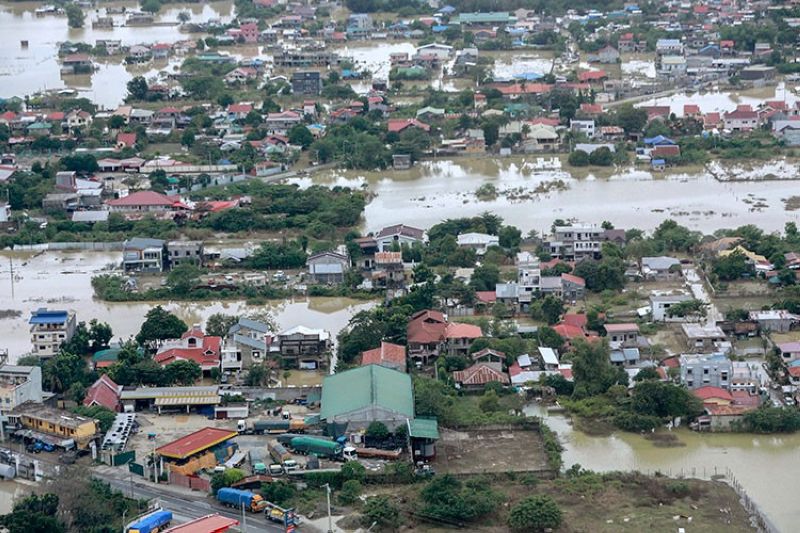 CAGAYAN. In this photo provided by the Malacanang Presidential Photographers Division, houses are surrounded by floodwaters brought about by Typhoon Ulysses inundate Cagayan Valley in northern Philippines on Sunday, November 15, 2020. (AP)

MINORITY Senators Francis Pangilinan and Risa Hointiveros have expressed intention to conduct an investigation on the Luzon flooding following a series of weather disturbances that affected thousands of families.

Pangilinan, the former chairperson of the National Irrigation Administration (NIA), said he is planning on filing a resolution seeking a Senate probe into the flooding that killed at least 24 people.

The investigation will be aimed to avoid similar incidents from happening again, he said.

He said there were protocols in releasing water from the dams, noting that it should be well coordinated with concerned government agencies, particularly the local government unit and Philippine Atmospheric, Geophysical and Astronomical Services Administration (Pagasa).

Hontiveros, for her part, has filed Senate Resolution 571, calling for an investigation on the manmade causes of the severe flooding in Cagayan, Rizal and Marikina City in the aftermath of Typhoon Ulysses.

She said it has an end view of institutionalizing sustainable and inter-generational measures against flooding and typhoon-related damage.

Hontiveros said logging and land-grabbing in the Upper Marikina Watershed and Sierra Madre mountain range could have been a factor, citing the information from the Masungi Geoserve.

“Alin dito ang talagang kasalanan natin? We need to know the answers immediately before the next typhoon hits. Natural calamities are beyond our control and can be unpredictable, but there are causes to the historic devastation of Typhoon Ulysses that could have been addressed,” she said in a separate statement.

“We are not new to natural disasters. Paulit-ulit ang kwento. Napapagod at nagagalit ang taumbayan, and rightly so. Let’s find out what is really causing this vicious cycle, and change the story once and for all,” she added.

Meanwhile, Defense Secretary Delfin Lorenzana said he is in favor of transferring the control on the opening of gates of water dams to the National Disaster Risk Reduction and Management Council (NDRRMC).

But he said it is only when there are typhoons, adding it would still be under the NIA during normal days.

Interior Secretary Eduardo Año made such remarks earlier, noting that releasing water on dams can be made even before a typhoon strikes.

Thousands of families were displaced, particularly in Cagayan, after their houses sank following the release of water from the Magat Dam.

It said the number of fatalities went up to 73 and 19 others remained missing.

Go has earlier proposed the creation of a special task force to ensure the immediate recovery and rehabilitation of the areas affected by Typhoon Rolly, which struck the Bicol region a week before Typhoon Ulysses wrecked the country.

He said it includes the provision of additional local Disaster Risk Reduction and Management Fund equivalent to one percent of their respective Internal Revenue Allotments particularly in Calabarzon, Mimaropa, and the Bicol region.