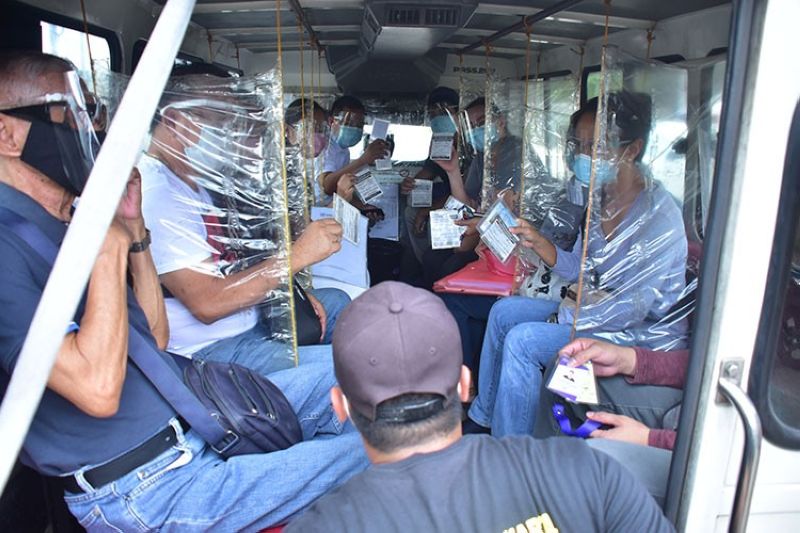 DABAWENYOS are once again adjusting to the reimposition of the food and medicine (FM), with some even resulting in a heated argument with checkpoint and establishment personnel.

The reimposition of the FM pass, the city's version of the quarantine pass, took effect on Tuesday, November 17, following the issued Executive Order 62 on Friday, November 13, which provides for the enforcement of the prohibition of non-essential travels.

Under section 3 of the EO, FM pass will be used to buy food or medicines. Two individuals can be named on the pass but only one named person can only use it at any given time. Also, it must be accompanied with a valid ID to verify the name indicated at checkpoints.

Section 3 (c) of the EO states that "mutual courtesy and respect shall be observed between traveller and frontline (checkpoint) personnel." However, some Dabawenyos expressed their disappointment and inconveniences.

Alfred, not his real name, told SunStar Davao that he was almost shouted at by a checkpoint personnel in an area he did not disclose.

He said he was going to the fitness gym near their area but was held after the security did not let him pass through even if he presented both gym ID and appointment confirmation, along with his FM pass.

The argument went on for almost 10 minutes before another personnel mediated and deemed his requirement valid.

"It was a messed up first day. I even presented the copy of the EO. But this personnel seem to have his own policy. I hope the mayor would reorient them kay samot kalangan ang mga tao tungod ani (it would only cause inconveniences)," Alfred said.

Bugayong said the checkpoint personnel barred him despite the city allowing exercises such as walking, jogging, and cycling.

According to the EO, they only need to present a valid ID with its detailed address. Also they are allowed for two hours maximum exercise, and shall be computed to be within 10 kilometers radius of the residential address.

Despite explaining, he was not barred, and even scolded.

(Police: How can you determine that you are exercising for two hours?; Me: It's still 6 a.m. It's been two hours since the curfew time ended; Police: Do not use that tone on me.)

He added, "Gikasaban ko og nagyawyaw na siya na di nalang daw mupalag kay mao ang balaod (He scolded me, and told me not to argue because that is the law)."

Another Facebook user Lsr S Trago said that he was almost not allowed to enter the city after failing to present a valid company ID.

He said he has an important errand at the Philippine Statistics Authority and that he is not working in the city.

Despite presenting a valid ID, such as SSS ID, he was still not allowed.

"Hindi sila makaintindi. Buti nalang sinabihan ako sa sunod hindi na daw ako makapasok pag walang company ID. What if magpunta sa airport going to Manila need pa rin ba ng company ID? Common sense naman sana sila (They do not understand that I am not a worker of the city, and I have an important appointment at a government office. But they kept on insisting that I need to present a company ID. What if I would be going to the airport to travel to Manila, should I need to present a company ID? It's already common sense)," Trago said.

Vivien Krizha Penaso also shared that she was almost apprehended after she did not notice that it was not her day to go out, based on her FM pass code.

"Muntik kana ikulong. Ba't daw ako lumabas kahit MWF [Monday-Wednesday-Friday] yung sched ko tapos Tuesday ngayon. Sabi ni kuya sa susunod dadamputin na daw niya ako. Haha. (I almost got apprehended because I went out on a wrong day. My FM pass states that I am only allowed to go out MWF, but I still went out on a Tuesday. The security personnel excused me for now, but I will be arrested if I will do it again)," Penaso said in her post.

Conde Odarg, meanwhile, criticized the lack of strict validation of the IDs presented on checkpoints.

Leahmae Camus Lumen, an employee, also shared how traffic it was on the first day of the FM pass.

Marjorie Tang Dani, meanwhile, chided the city's decision not to postpone the reimposition of the FM pass, saying she had lost her pass.

Luisa Tess Luna, who went to the mall on that day, also noticed a few people inside when she had her lunch at a food court.

Museo Dabawenyo officer-in-charge Winnie Rose Galay-Bulig also noticed a few people outside, saying that the reimposition of the FM pass had been "very effective."

Davao City Police Office (DCPO) spokesperson Captain Rose Aguilar told SunStar Davao in a phone interview that they are still assessing the situation. But nonetheless, she said they are expecting some complaints considering this is the first day of the implementation.

"Pero maayo ni nga reaction, bisan naa ta nadawat nga complaints. Tungod ang mga tao mismo, aware na sila sa unsa ang kinahanglan nila himuon ug dad-on pag mugawas sila. (This is a good indicator that the public is aware of what they need to do, and what to bring when going out.) But of course, we will still look into these complaints," the police official said.

Agular said in a phone interview a day before the implementation that the city will be stringent in the checkpoints.

She also emphasized that they need to ensure that those going out would only be travelling for essential purposes such as accessing food and medicine, going to work or business, and other important errands.

Meanwhile, Mayor Sara Duterte-Carpio said that those who lost their FM passes can ask for a certification from their respective barangays.

The mayor also said that the city has available FM passes.

"We have available FM passes in our assigned team leader in Sangguniang Panlungsod. We will pass this down to the barangay local officials para didto kuhaon sa mga tao na in need of FM pass (so that they can get their FM passes there)," Duterte-Carpio said on Monday, November 17.