Adiwang looks for rematch vs Minowa 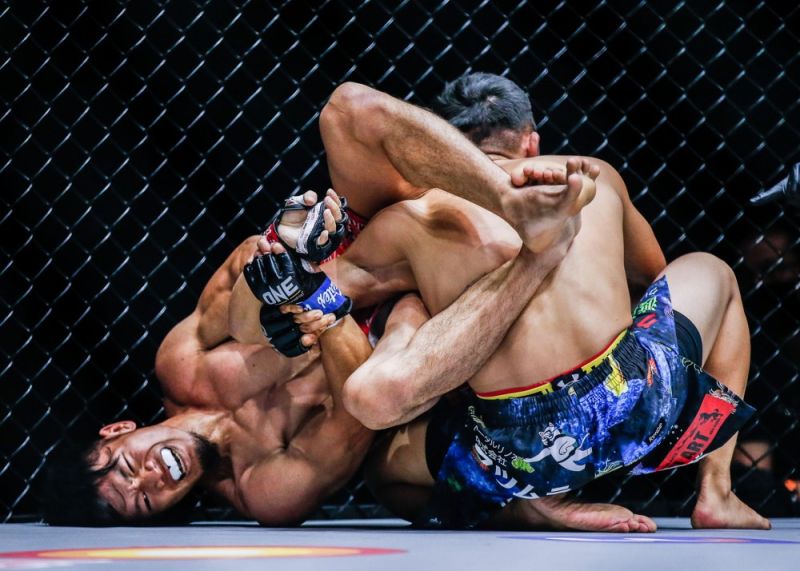 NEAR SUBMISSION. Lito Adiwang looks to submit Hiroba Minowa Friday, November 13, at ONE: Inside the Matrix III, a previously recorded event from the Singapore Indoor Stadium. The Japanese fighter however escaped and pulled off a close split decision victory. (ONE photo)

THE dream to become a world champion remains the ultimate goal for Lito Adiwang despite suffering a major setback last week.

And after a tough split decision loss against Hiroba Minowa, Team Lakay's Adiwang wants a rematch, in order to reclaim his spot in the top five of ONE Championship's strawweight division.

Adiwang's seven win streak ended that night but many believe his opponent did not do enough to secure the win.

Minowa immediately marked himself out as a major threat in ONE with a wrestling-heavy victory over #5-ranked contender Adiwang on Friday, November 13, at ONE: Inside the Matrix III, a previously recorded event from the Singapore Indoor Stadium.

"Honestly, in the first round, I had that submission locked in. I had his arm trapped, and I left a slight opening for him so he could tap. Everything just happened so fast. All I know is that the armlock was deep," Adiwang said.

Adiwang launched the first attack of the opening frame in typical ferocious fashion, as he clubbed his Japanese rival with a hard cross-hook-cross combination but Minowa responded with a takedown and was not out of danger on the ground.

The Team Lakay rising star quickly cinched up a figure-four grip and looked for his second consecutive kimura victory.

He wrenched Minowa's arm at a wince-inducing angle, but just when it looked like the fight might be over, the Saitama native managed to roll out and escape to top position, where he spent the rest of the stanza until a late armbar attempt from the Filipino.

"A lot of fans told me they noticed he tapped in the first round. I'm not going to say anything except that I am asking for a rematch so we can close the case. The best way to end the speculation is by having a rematch," added Adiwang.

After the first-round scare, Minowa used his footwork to stay out of Adiwang's firing line early in the second. He bided his time and then capitalized on a missed spinning back kick to rush the Team Lakay product to the mat.

"It's up to ONE Championship but for me I want the rematch. And will make sure to finish him and won't let the judges score the bout," added Adiwang.

Despite the loss, Adiwang added he remains upbeat of his future in One Championship adding he has learned a lot and promised to correct the mistakes and improve to become a better fighter.