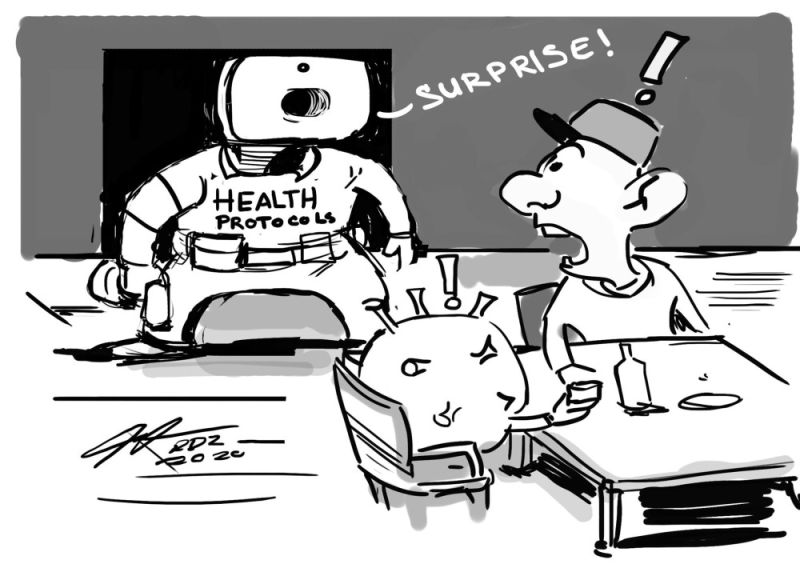 WE CAN even go as far as pushing for a liquor ban in public places all the way until a vaccine comes around. In fact, we find it off that bars aren’t sharing the same fate as the movie theaters and amusement parks. Studies show that restaurants, bars and places of worship are among the riskiest areas for Covid-19 transmission.

When the Cebu City Police Office (CCPO) launched its rounds in the city under Oplan Bulabog on Nov. 14, 2020, the Mabolo Police swooped on a resto-bar in Barangay Kasambagan hosting a good number of youngsters. Whatever the degree of regulation in drinking places, it might be too naïve to imagine the drinkers will forever keep the social distance. The virus is one big spender swinging open the barn doors.

A village chief concerned explained that all the business establishments in his area were sufficiently briefed on health protocols, and yet the CCPO in one round dispersed a good number of soused miscreants home.

Councilor Joel Garganera, Cebu City’s Emergency Operations Center head, said contact tracing showed that the recent infections have a history of “drinking and eating sprees,” apparently done in public areas. It might be best now for the City Government to re-implement a liquor ban in public places.

An overarching ban will spare the city police of that cat-and-mouse game with resto-bars and disperse yet another potential area of transmission outbreak.

Garganera also pointed out that workplaces were the common sites of transmission, citing a few recent cases.

As a reaction, the Cebu Chamber of Commerce and Industry had issued an advisory among its members on Nov. 16 to heighten their watch as far as observing the minimum health standards, protecting its workers and customers.

The public, on the other hand, can keep the businesses on their toes. The Filipino-Cebuano Business Club (FilCeb) had urged consumers to patronize establishments that are strictly implementing the safety protocols.

It would seem now that consumer safety will play a big part in brand equity under the new normal. Businesses should be taking note of this from hereon.