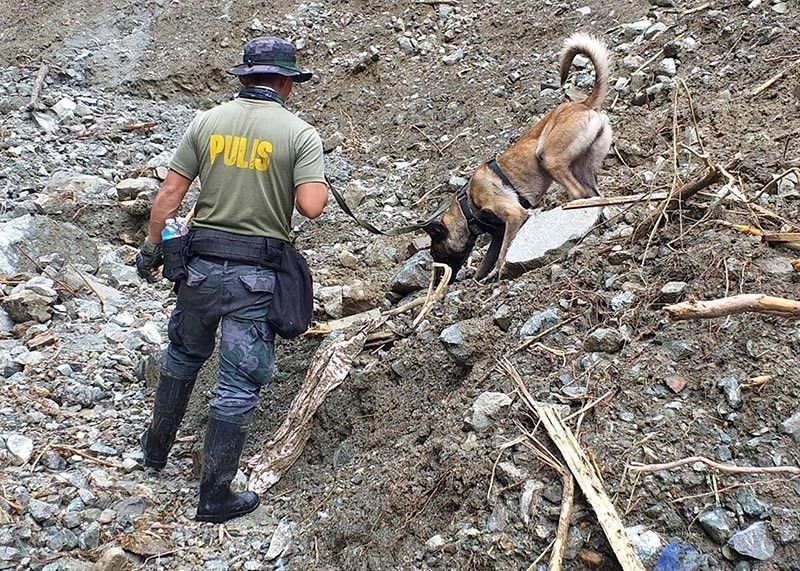 K9 ON DUTY. One of the four elite dogs of the Police Regional Office (PRO)-Cordillera K9 Unit are deployed in Ifugao Province to assist in the search and rescue operations. These K9s will also be sent to the Cagayan area to help in similar operations. (PRO-Cordillera)

FOLLOWING the onslaught of Typhoon Ulysses in the country, the Police Regional Office (PRO)-Cordillera has mobilized personnel and resources, including its K9 unit, to help in the relief and rescue operations within and outside the region.

Brigadier General R'win Pagkalinawan, PRO-Cordillera director, said while the regional police recognizes the bravery of the first responders and rescuers both from the government and civilian sector, it has also utilized the help of its K9 units.

"Jackson, Penny and Idol, all Belgian Malinois from the Explosives and Ordnance Division and Canine Unit and Ifugao Provincial Mobile Force Command, have been deployed along with their handlers for the search and retrieval operations of the DPWH (Department of Public Works and Highways) workers who were buried in a landslide while clearing a blocked road in Banaue, Ifugao," Pagkalinawan said.

Panther, another member of the PNP K9's Unit and a Belgian Malinois from Ifugao PMFC, was recently sent to help, as one of the missing persons has yet to be found.

"Dogs have been known not only as man's best friend but also as law enforcement partners in tracking, drug and bomb detection and in search and rescue operations in times of calamities. Truly, these furry creatures deserve to be called heroes in these trying times," Pagkalinawan added.

Earlier, close to 800 PRO-Cordillera personnel were deployed to assist in the search, rescue, and evacuation operations in the affected areas in the Cordillera region and nearby province during and after the onslaught of Typhoon Ulysses.

Watercraft and other search and rescue equipment were also brought to the area to aid in their operation.

Two pontoon boats and one swan boat were provided by Baguio City Police Office with the help of Vivian Celso while Abra PMFC and RMFB15 brought with the one fiber glass boat and one rubber boat respectively.

PRO-Cordillera is also conducting clean-up of evacuation centers, hauling and transportation of food packs, and help in unloading, repacking and delivery of relief goods for the victims of the typhoon.

Eight vehicles, including one ambulance and personnel from the PRO-Cordillera Regional Health Services were also sent to the area carrying.

The regional police also brought more than 2,000 food packs from the Department of Social Welfare and Development.

Pagkalinawan reiterated that PRO-Cordillera will continue to work tirelessly by giving their full effort to be able to help and assist those who were affected by the calamity.