Luzon placed under state of calamity 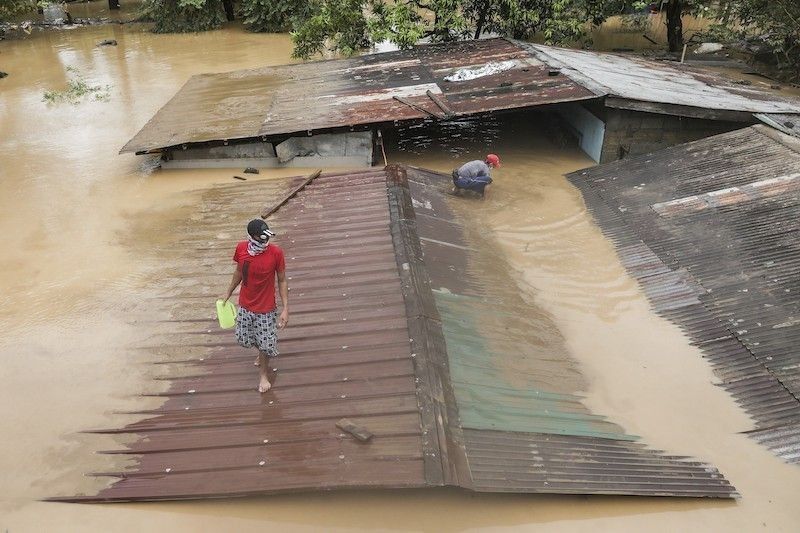 MANILA. A man walks on top of a roof of a submerged house as floods inundate villages due to Typhoon Vamco in Rizal province, Philippines on Thursday. November 12, 2020. (AP File)

PRESIDENT Rodrigo Duterte has approved the recommendation to place the entire Luzon under a state of calamity following the series of destructive typhoons that struck the country over the past weeks.

The declaration of a state of calamity is contained in Proclamation No. 1051, which Duterte signed on Wednesday, November 18, 2020.

“This can help hasten all the rescue relief and rehabilitation efforts of both government and private sector that have been assisting us and including possible international humanitarian assistance,” Galvez said in a press briefing on Thursday, November 19, 2020.

A state of calamity declaration allows the government to tap its calamity funds for relief and rehabilitation efforts.

Galvez said LGUs are given the power to access their calamity fund for the rehabilitation of damaged infrastructure and facilities while a supplemental budget may fund the procurement of equipment and services deemed useful for their disaster resilience efforts.

Proclamation 1051 also states that the declaration of a state of calamity will effectively control the prices of basic goods and commodities in the affected areas and provide the national government and the LGUs ample latitude to utilize appropriate funds for rescue, recovery, relief and rehabilitation efforts,

Galvez said a price freeze will be imposed for 60 days unless it is lifted before the end of the said period. Aside from the price freeze, a price ceiling will also be set for prime commodities to prevent overpricing.

Importation and donation of necessary supplies such as food, clothes, medicines, and equipment necessary in responding to calamities will be allowed.

No-interest loans by government financing or lending institutions will be granted to the affected individuals, Galvez added.

As of November 19, 2020, Galvez said P4 billion worth of agriculture and P6.1 billion of infrastructure were destroyed by the series of typhoons.

He said a total of 65,221 houses were damaged or destroyed due to flooding and strong winds triggered by the typhoons.

At least 73 people died while 19 others are still missing.

Over 800,000 families or nearly 3.5 million individuals were affected and most were staying in evacuation centers. (SunStar Philippines)