After surviving the pandemic: Is boxing ripe for return in Benguet? 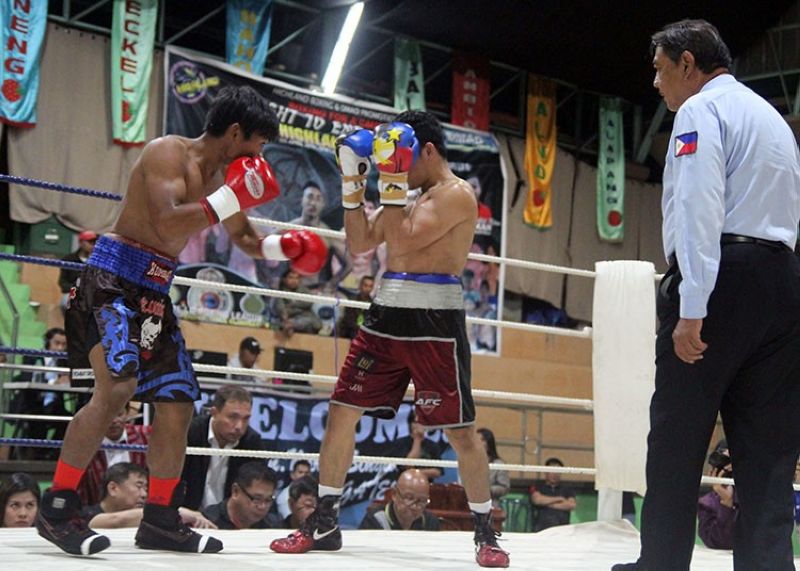 THROWBACK. Local fighters slug it out during a boxing-for-a-cause in 2019 at the La Trinidad gym. Benguet-based promoters are looking forward to holding boxing events in the province but they need to study several factors, such as finances and health protocols. (Roderick Osis)

WHILE professional boxing has resumed in some parts of the country, Benguet based promoters have yet to calendar an event for the year.

Darwin Miller Dep-ay of DMAD Boxing Promotions said they yearn for the return of professional boxing and is thinking of staging an event but is hampered by cost.

“Mahal. Kasi you have to shoulder the cost of testing from the fighters, trainers, ringside officials, representative from the Games and Amusement Board and other incidentals such gym rental, food and others,” added Dep-ay.

Dep-ay's DMAD was among the most promising boxing promotions in the country in 2019, promoting at least four events in 2019.

Brico Santig, of the Highland Boxing Gym, is also looking forward to promoting boxing again this month and hopefully during the month long Benguet founding anniversary.

Santig usually promotes 12-14 fight card in a year, at least twice in Benguet, which earned him the top local boxing promotions in the country in 2019.

The La Trinidad based promoter, in his 12 events last year, has 17 national, regional, and international titles in his several fight cards in becoming the top promoter for 2019 according to boxrec.com, a website dedicated to holding updated records of professional boxers, both male and female.

Yearly, Santig makes sure he promotes during La Trinidad’s Strawberry Festival in February and Benguet’s Adivay every November.

However, due to the cancellation of the Strawberry Festival in March and the series of community quarantines imposed in the different parts of the country, Santig has only promoted four events this year, three in Thailand and one Manila.

Recently, to lessen the impact of Covid-19, 37 professional boxers from Highland Boxing Gym received bags of help which include five kilos of rice, two dozen eggs, and grocery items as assistance from Naris Singwangcha.

This is the second batch of Singwangcha’s beneficiaries, all professional boxers, whose livelihood is on a halt since the community lockdowns, Santig said the 37 fighters were supposed to be included in the list of social amelioration program beneficiaries of the Department of Social Welfare and Development coursed by the Games and Amusement Board, to assist prizefighters deprived of work due to the pandemic.

While the two SAP batches were received by boxers from other areas in the Philippines, Benguet fighters received none.

Jake Nabuye, an Itogon based boxing promoter said some of his fighters have resorted to working odd jobs just to earn a decent living.

Nabuye claimed some fighters are already stressed due to lack of physical training and livelihood but he said they make sure they stay mentally fit by constant communication.

As boxing is on a standstill, fighters in the region wait for the time their livelihood resumes and for the crowds to cheer them on.