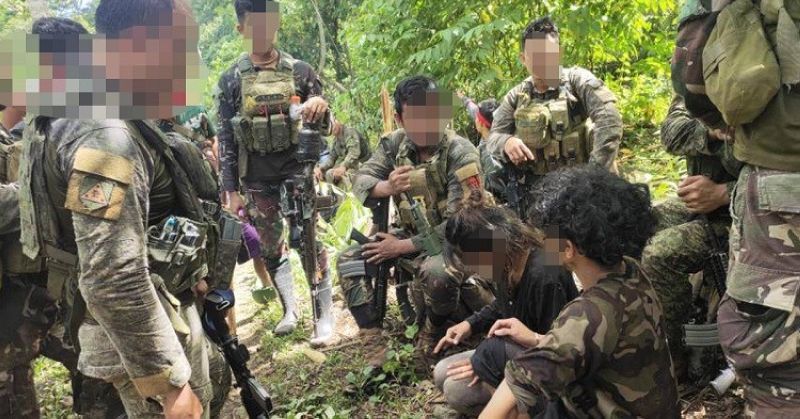 THE Davao City Government said the recent capture of two young members of a terrorist group in Sitio Quibolog in Barangay Mapula, Paquibato District "unmasked and exposed the true face" of the Mindanao Interfaith Services Foundation, Inc. (Misfi) and the Haran Center of the United Church of Christ in the Philippines in Davao City.

Based on the report from the 27th Infantry Battalion of the 10th Infantry Division, Philippine Army, a former Misfi scholar and a Haran teacher working on Father Selga Street in Barangay 8-A were arrested on November 14 during an earlier encounter between government soldiers and the New People's Army (NPA).

Government authorities identified the arrested as Nasria Bansil and Geliejorain Ngojo, both Misfi scholars, and served as part-time teachers for Lumad children and elderly people camping at the Haran compound.

The arrested NPA members said aside from them who were separated from the group, some of their comrades were also injured after the encounter.

In an issued statement on Thursday afternoon, the City Government commended the government troops for the recent successful operations against the NPA in Paquibato District.

"It also unmasked and exposed the true face of the Mindanao Interfaith Services Foundation, Inc. (Misfi) and the Haran Center of the United Church of Christ in the Philippines in Davao City," the City Government said in a statement.

As scholars, the government said the two were made to sign a Return Service contract, binding them to serve and volunteer with organizations allied with the scholarship donor.

They said before finishing college in 2019, both Bansil and Ngojo volunteered twice in Haran, teaching what they called "Litnum" or basic literacy and numeracy education.

The local government said the two were recruited to become full-time cadres of the terrorist group earlier this year.

"Clearly, Misfi and Haran played important and active roles in the recruitment of Bansil and Ngojo into the underground terrorist movement," the City said, adding these organizations "primed and prepared them into joining a terrorist group that has perpetuated the condition of poverty and underdevelopment across upland communities of indigenous peoples."

The City reiterated "the warning of the security sector about the existence and operations of groups that serve as recruitment arms and fronts of the NPAs."

The local government likened the Misfi schools to the recently closed Salugpungan Ta Tanu Igkanugon Community Learning Center (STTICLC) that has been reportedly teaching ideologies of the NPA, which had been "alarmingly persistent" over the years.

"Haran, on the one hand, has been sheltering lumads from Talaingod in Davao del Norte — apparently to bolster the Left’s campaign against military operations in hinterland areas where the terrorists NPAs are operating," it said.

The City Government said they are currently working to establish order and sustainable development in Paquibato District through Peace 911, a city program that provides livelihood and economic opportunities, education, roads, bridges, community health centers, and other infrastructure projects.

Representatives from Misfi have not yet issued their statements as of Friday.

Haran and Salugpungan, in a previous report, had been denying the local government's allegations, citing it as a constant "red-tagging and terror-tagging" against them. (Ralph Lawrence G. Llemit with reports from Jeepy P. Compio)