Only 19 jeepneys allowed so far 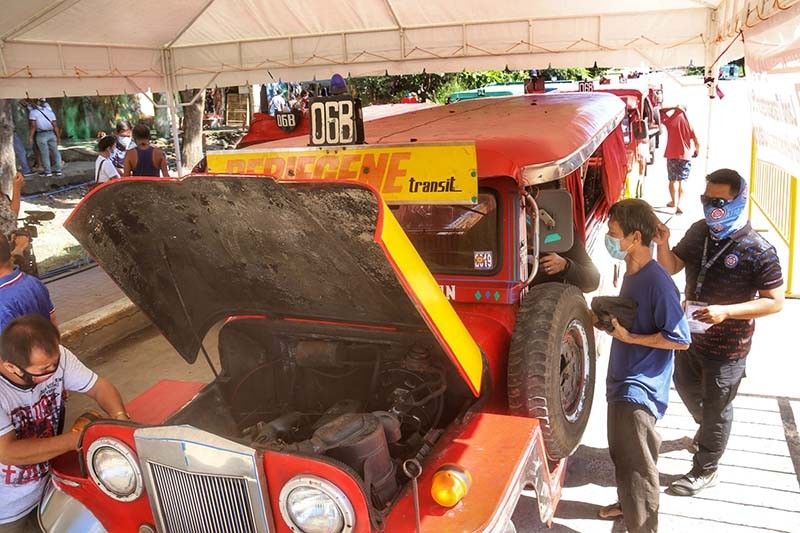 KING OF THE ROAD. As things begin to look normal on the city’s streets, the ubiquitous presence of the so-called “king of the road” remains to be the missing link between the past pre-Covid days and the present. However, before they are allowed back, the traditional jeepneys are subjected to a series of tests to check on their roadworthiness and if Covid health protocols like barriers to ensure distancing inside have been followed. So far, only 19 units have passed the strict requirements. / Amper Campaña

Out of dozens of applicants, only 19 traditional public utility jeepney (TPUJs) can start plying certain routes in Cebu City, so far.

Others have yet to go through the inspection.

The transportation agencies checked on the units’ roadworthiness, and the barriers and posters installed as part of the health protocols.

Out of 61 units inspected, only 28 passed the motor vehicle inspection system of the LTO. Of that number, only 19 units passed the emission test conducted by the CCTO and were subsequently given a permit by the Jeepney Task Force (JTF).

The TPUJs now add to the buses that have been serving as mass public transportation on a limited occupancy.

For TPUJ driver Mark Leo Pagobo, this development is very beneficial to them.

Pagobo had shifted to delivery services using a motorcycle during the seven-month suspension of the TPUJs to eke out a living.

Of the 10, three are residents of Cebu Province, while seven are from Cebu City.

A total of 291 drivers had taken the swab tests conducted by the Emergency Operations Center in coordination with the Department of Health (DOH) Central Visayas and Vicente Sotto Memorial Medical Center.

Cuenco said around 40 other drivers and some LTO personnel were also advised to go on home quarantine after one of the drivers who took the swab test on Nov. 16 and attended the seminar after, tested positive for the virus.

Aside from the TPUJ units’ condition, the drivers need to secure a negative test result to be able to ply the city streets again.

Cuenco said starting next week, Nov. 23, the LTFRB, LTO, and CCTO will hold inspections at the North Reclamation Area until the units of all the 1,300 drivers who registered under the Balik Pasada Program will be inspected.

But those with unpaid penalties of not more than P10,000 will have to pay in full to get a Team clearance that will be valid for a year.

This was agreed upon by the committee on transportation chaired by Councilor Jimmy Lumapas on Thursday, Nov. 19.

According to John Eddu Ibañez, executive secretary of Mandaue City Mayor Jonas Cortes, an executive order will be issued regarding the installment scheme.

The committee agreed that those without violations and pending penalties will be endorsed to the Emergency Operations Center (EOC) for a free swab test.

In an interview, Ronilo Gahator, vice chairman of Pinagkaisang Samahan ng Tsuper at Operators Nationwide (Piston), said most of the drivers in Mandaue City have penalties amounting to less than P10,000 but still could not afford to pay in full.

Ibañez said they will still allow installment for penalties below P10,000; however, the drivers and operators could only get the provisional Team clearance valid for six months.

Gahator also said they are worried that after six months they still could not pay the penalties due to the limited passenger capacity.

The drivers’ group plans to air these concerns before Cortes next week.

After the issuance of the Team clearance, the Emergency Operations Center will schedule swab testing for the drivers and operators starting Tuesday, Nov. 24 at the testing areas in Norkis Park and San Roque Parish.

Ibañez said the swab testing will be scheduled by barangay for those residents in Mandaue City.

Drivers and operators who are not residents of Mandaue City will have to take their swab test at their respective local government units for easier contact tracing if found positive, said Ibañez.

Those who test negative for the virus will be endorsed to Team by the EOC while those who test positive will be made to undergo treatment.