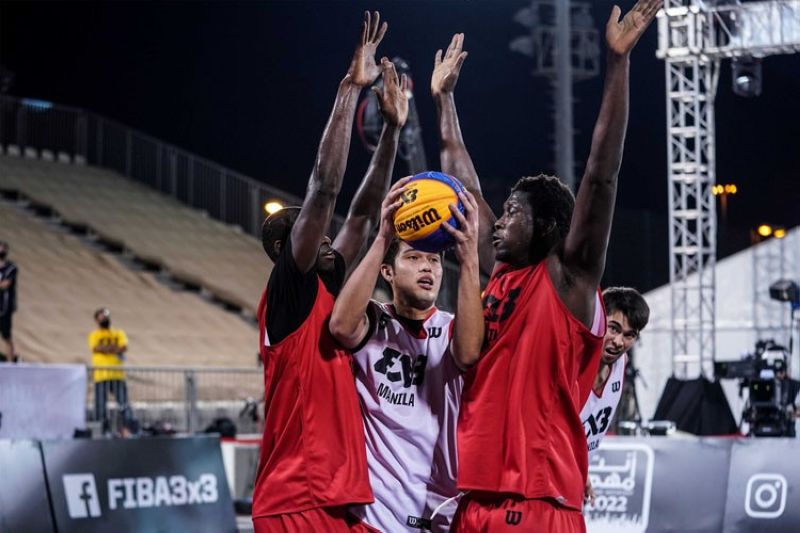 The Manila Chooks TM were ousted from the 2020 FIBA 3X3 Doha World Tour Masters after they suffered a 14-19 loss at the hands of the home team, Lusail, on Saturday at the Al Gharafa Sports Complex in Doha, Qatar.

The loss was the Philippine side’s second in a row after opening their campaign with a 15-22 loss to the world’s top team, Liman.

In their second match, the Qatari squad took full advantage of their height advantage, leaning on 6-foot-10 behemoth Souley Ndour of Senegal to build an early 5-2 lead. Cebuano Leonard Santillan tried to give Manila a lift, scoring on a jam before swatting away Ndour's attempt.

Alvin Pasaol joined in the party with a bucket of his own and a block on Ndour as well. However, the Davao-native hurt his right shin as he landed. That's when Lusail pulled away.

Behind the dominance in the paint of Ndour and the veteran wits of 36-year-old Greek Kostas Vasileiadis, the home team raced to a 10-16 lead and never looked back.

Joshua Munzon led Manila with eight points and five boards while Santillan and Pasaol had three and two markers, respectively. Troy Rike, who played hurt after a collision with Ndour midway through the game, had a point and two rebounds.

In their first game, the Philippine team found themselves down by seven, 5-12, before Munzon helped them pull to within one with a barrage of long two-pointers. Liman, though, utilized its size, leaning on Mihailo Vasic and Stefan Kojic — both of whom stand 6-foot-6 — to stop their bleeding.

Though Alvin Pasaol tried to keep Manila afloat but Stefan Stojacic, who is the head trainer of Gilas 3x3, shut the door for any comeback. The 2017 World Tour MVP knocked down the game-sealing deuce with 2:22 to spare to sweep Pool A and advance to the knockout playoffs on Saturday. (JNP)