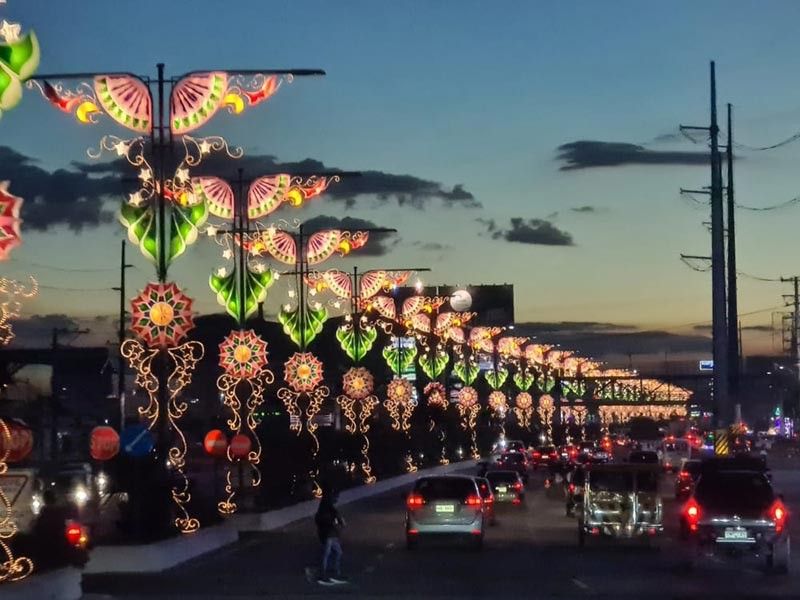 RAYS OF HOPE. Amid the Covid-19 pandemic and natural disasters, the 'Parul Sampernandu' or Fernandino lanterns like those along Jose Abad Santos Avenue in the City of San Fernando, continue to shine with rays of hope. (Chris Navarro)

AMID the Covid-19 pandemic and the aftermath of recent typhoons that hit Pampanga, the City Government of San Fernando and its private sector partners have joined hands to keep the “Parul Sampernandu” or Fernandino lanterns shining.

Parul Sampernandu's message for this year, “rays of hope,” is dedicated to coronavirus patients and frontliners not only in the country but across the globe.

According to City Investment Promotion Officer Engineer Remedios Agoncillo, while the City Government is focusing on health care and social services now, they exerted effort to lighting up lanterns, giving hope to Fernandinos amid the pandemic.

Agoncillo said due to limited funding, the materials used for this year’s lanterns were from the previous year, while some of the lanterns were donated by the city’s stakeholders, including Converge ICT Solutions, Inc. and PLDT Communications, Inc.

The lanterns along Jose Abad Santos Avenue--the city’s version of Ayala Avenue--were destroyed by the onslaught of Typhoon Rolly, but their repair and improvement were immediately undertaken by teams led by two Fernandino master lantern makers, Arvin Quiwa and Roland Quiambao, who have been both designing the Parul Sampernandu for years now.

The launching of the lantern displays was held on November 16, 2020, at the City’s Command and Control Center in Barangay San Isidro and was personally witnessed by Mayor Edwin “EdSa” Santiago and former Philippine president Gloria Macapagal-Arroyo, who served as the event’s main guest.

For this year, the lantern displays initially lit up were at Heroes Hall in San Juan; City Hall and Poblacion Area; and Civic Center in San Isidro.

Under the Tourism and Culture agenda of the Santiago administration, the City is steadfast in supporting its local lantern makers.

Apart from tapping them to create the lantern displays yearly, the City also recently rolled out its economic recovery assistance under the Economic Recovery and Rehabilitation Program, where each of the 30 registered and legitimate lantern makers received P20,000 worth of monetary and in-kind assistance. (JTD)