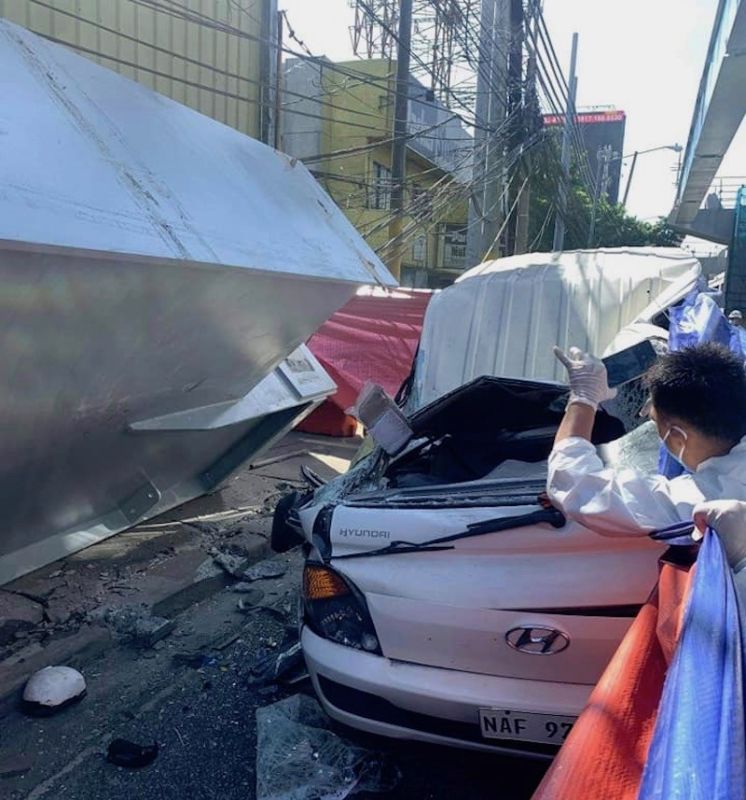 (Photo from Muntinlupa City Department of Disaster Resilience and Management)

In a statement, Ang assured the victims that their needs would be taken care of.

He said that while EEI Corporation, as contractor, is handling the project, SMC has a responsibility to take care of the victims. SMC is the concession holder of the Skyway project.

“Even with a contractor handling construction, ultimately, we are responsible for the welfare of those who were affected. I would like to personally apologize to the victims and their families, as well as to our larger community in Muntinlupa,” Ang said.

One person died and four others were injured when a girder spanning two posts of the northbound Skyway Extension project in Cupang, Muntinlupa City fell at 8:50 a.m. Saturday, November 21.

EEI, in a statement on Saturday, said a crane that was being positioned for its next task tilted and fell on the girder, causing the girder to fall on six vehicles below.

“This terrible and tragic accident has affected me in ways I can’t even begin to express. I have not stopped thinking about the people who were affected, the four that were injured and most especially, the person who perished, and his family. There are no words that can ease the grief of losing a loved one,” Ang said.

“To the family, I can only offer my sincerest and deepest condolences, and my personal assurance that your family will be taken care of. To those who were injured, please be assured we will provide all the means necessary for you to recover and restart,” he added.

Ang also vowed that the incident will be investigated thoroughly, and that SMC and its contractor EEI will make sure even stricter measures would be put in place at the project site.

“In a project of this magnitude and scale, there are many redundant safety measures in place. Unfortunately, we can’t predict every outcome, and I’m sure no one wanted this to happen,” Ang said.

“Regardless, we are working with authorities to determine the root cause of this incident. We will find out where lapses occured and do whatever is necessary to help make sure they don’t happen again,” he added.

The P10-billion Skyway Extension project provides additional lanes and connects the South Luzon Expressway (SLEX) to the Skyway near Susanna Heights and the Muntinlupa-Cavite Expressway.

The project is seen as key to reducing traffic in southern Metro Manila, particularly the SLEX and the Alabang area while providing motorists from the south direct access to the elevated Skyway.

Ang announced in early October the completion of the Skyway 3 project, a 17.93-kilometer stretch that links SLEX and Northern Luzon Expressway (NLEX). This would be opened to the public in December as finishing works, such as the proper curing of asphalt, have been delayed by continuous rains. (Marites Villamor-Ilano/SunStar Philippines)