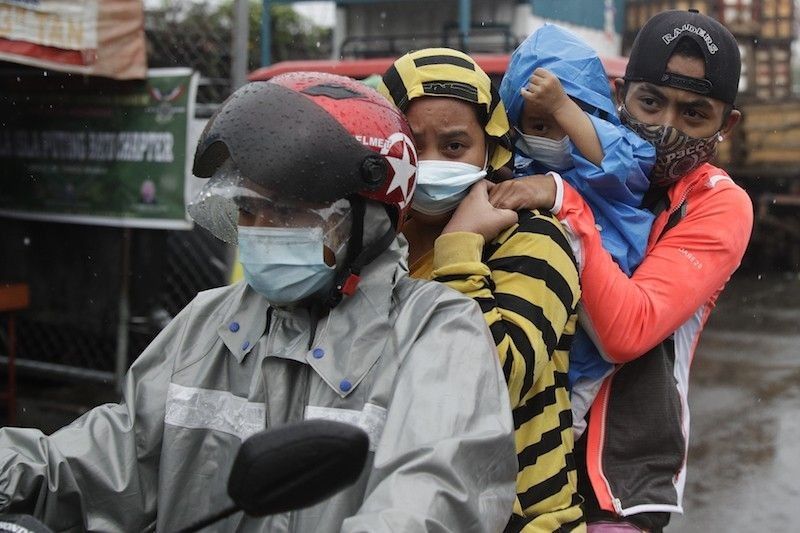 MANILA. A couple and their child as well as the driver of a motorcycle wear masks against the coronavirus disease 2019 (Covid-19) as they move to safer areas ahead of Typhoon Rolly, so far the strongest typhoon in the world in 2020. (AP File)

FOR 13 consecutive days, the Department of Health (DOH) reported less than 2,000 coronavirus infections a day.

These brought the total case count in the country to 418,818.

The DOH case bulletin on Sunday also reported 10,957 recoveries under the agency’s time-based recovery scheme, which declares as recovery a mild or asymptomatic case with no symptoms of coronavirus disease 2019 (Covid-19) for at least 14 days.

These new recoveries reduced the active cases to 24,209, or 5.8 percent of the total.

The agency also reported 43 additional mortalities, raising the death toll from Covid-19 to 8,123.

Globally, the Philippines remained in the 26th spot among countries with the highest number of infections as of November 22, according to the Johns Hopkins Coronavirus Resource Center.

More than 58.1 million people worldwide have contracted Sars-CoV-2, the virus that causes Covid-19. Over 1.38 million had died, including 255,899 in the United States.

DOH officials earlier said, however, that the low numbers in the first two weeks of November may be attributed to fewer tests conducted due to the temporary closure of some diagnostics laboratories in typhoon-hit areas in Luzon and Eastern Visayas.

Bicol, Calabarzon, Mimaropa and Eastern Visayas were pummeled by powerful Typhoon Rolly (Goni), which made landfall over Catanduanes as a super typhoon on November 1.

It was followed by Typhoon Ulysses (Vamco) on November 11, which caused devastating floods in Camarines provinces, Quezon and Rizal provinces, Marikina City, and Cagayan and Isabela provinces.

As of November 20, the National Capital Region (NCR) continued to post the highest number of cases in the Philippines, with 8,601 active cases and 357 new cases.

Davao Region came in fourth with 2,459 active cases and 127 new cases. Davao City was recently reverted to general community quarantine until end-November because of rising cases.

Central Visayas, including former hotspot Cebu City, had the seventh highest number of active cases at 1,207. There were 83 new cases, the sixth highest on November 20.

Nationwide, there are 1,440 patients in critical condition and 764 who are severely ill among the active cases as of November 20. (Marites Villamor-Ilano/SunStar Philippines)