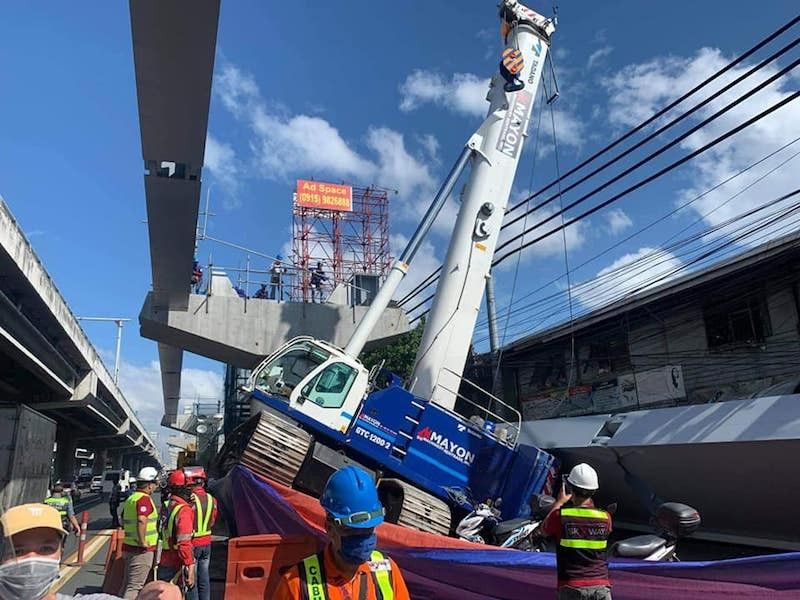 THE operator of the crane that hit and caused a girder to fall, killing one man and injuring four others, may be charged with reckless imprudence resulting in homicide, damage to properties and multiple physical injuries.

Enrico Navora Gregorio underwent inquest proceedings at the Muntinlupa City Police Office on Sunday, November 22, 2020, a day after the accident.

He was not accompanied by a lawyer, according to Muntinlupa Police Chief Melecio Buslig. Gregorio turned emotional during the proceedings, Buslig said.

Meanwhile, the widow of lone fatality Edison Paquibot called for the conduct of an investigation into the safety measures adopted by the contractor at the project site.

"This is for the benefit of the public pero public din 'yung nag-suffer. So we have to look into it ano ba ang protocol nila, ano ba ang safety precautions that should be observed at bakit nangyari ‘yon? Papasok lang ang asawa ko sa trabaho,” Paquibot said over radio on Sunday.

Her husband Edison was on his way to work when the girder fell on six vehicles at around 9 a.m. Saturday, November 21, in Cupang, Muntinlupa City.

Project contractor EEI Corporation said a crane that was being moved into position tilted and hit the girder, causing it to fall.

The area was reopened to traffic on Sunday morning following the clearing of debris.

Muntinlupa City Representative Ruffy Biazon said on Saturday that contractor EEI Corporation should be held accountable for the incident.

“This incident necessitates an urgent and in-depth investigation as to the cause of the crane’s malfunction, which led to the crash of the Skyway steel girders. To a layman’s observation, it appears to be a preventable accident,” Biazon said in a statement.

“Definitely, the contractor will have to be held accountable to the loss of life, limb, and property. The appropriate authorities should immediately conduct the investigation and report out the findings,” he added.

EEI, in a statement on Saturday, said it was going to immediately review its safety and operating protocols.

The company also said it was closely coordinating with the families of the victims and were willing to extend assistance.

San Miguel Corporation (SMC) president and chief operating officer Ramon Ang has issued a personal apology over the incident. SMC is the concession holder of the Skyway project.

Ang has vowed to conduct a thorough investigation and ensure that more stringent safety measures would be put in place at the project site. (SunStar Philippines)