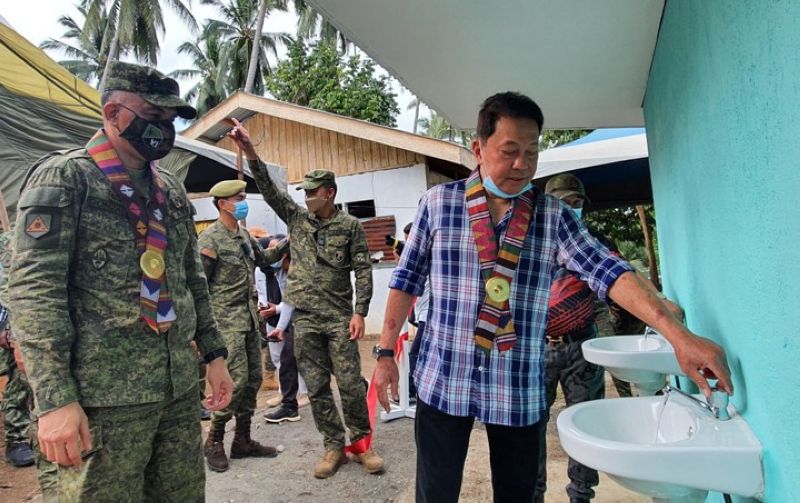 Tan and Gonzales led the activity as they ushered Friday, November 20, 2020, the return of 206 families who fled their homes in Kabbon Takas village, Patikul four years ago due to atrocities made by Abu Sayyaf bandits.

Lieutenant Jerrica Angela Manongdo, JTF Sulu information officer, said the return of displaced families was made possible through the Balik Barangay Program initiated by the governor’s office in partnership with the JTF Sulu.

Manongdo said the peace covenant was signed by key officials to include members of Patikul Municipal Task Force to End Local Armed Conflict (MTF-ELAC) and village officials of Kabbon Takas.

Ahajuli Ahajani, Kabbon Takas village chairperson, has expressed gratitude on behalf of residents for the efforts exerted by Tan and Gonzales.

“We evacuated three times. We are always forced to leave due to the atrocities committed by the Abu Sayyaf. We are thankful that we’re able to return. The residents are optimistic that we will permanently settle here,” Ahajani said.

Tan facilitated the provision of basic necessities of families such as the roofing materials for rebuilding their shelters, food packs, sacks of rice, footwears and P5,000 for each of the 206 families.

Tan emphasized the provision of basic necessities was possible through the concerted efforts of several offices.

“It is not only the governor’s office, the military but all agencies, particularly the Department of Social Welfare and Development. We asked from their regional office to put a housing project in Kabbon Takas,” Tan said.

Gonzales has tasked the 1102nd Infantry Brigade under Brigadier General Ignatius Patrimonio to oversee the establishment of the 6th Special Forces Battalion patrol base to secure the community from Abu Sayyaf bandits. (SunStar Zamboanga)