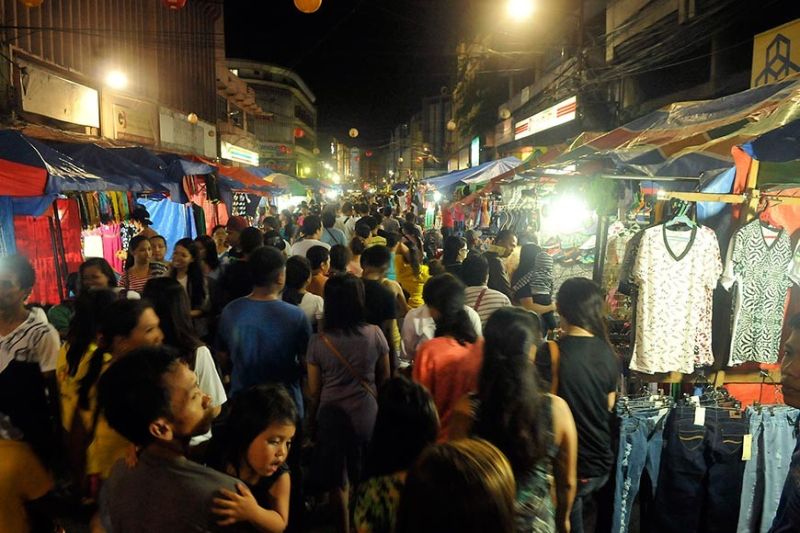 PRE-COVID CEBU CITY. There was a time when a portion of Colon St. in downtown Cebu City was closed to motor traffic and was transformed into a pedestrian lane that was lined with stalls selling all sorts of goods on both sides. Opened from December to March, the night market became a magnet for residents on the lookout for bargains. If the plan to open one pushes through this year amid the coronavirus pandemic, it won’t be the same. There will be changes like fewer stalls, a limited crowd and a strict implementation of health protocol. (SunStar file)

WILL there be a night market this year?

The Cebu City Market Operations Division is mulling its return amid the coronavirus disease 2019 (Covid-19) pandemic.

City Market Officer Irvin Cabales said his office has already submitted the recommendation to the mayor’s office for the night market to resume operation in early December.

Cabales said they will limit the number of participating vendors to 300 to ensure health protocol will be observed.

If the recommendation is approved, stalls must be one meter apart from each other. Stall workers must wear face masks and face shields. Each stall must also provide hand sanitizers or alcohol for their customers.

Cabales said they will implement a “one entrance and one exit policy.”

Unlike in the past when the night market was open until midnight, Cabales said they’re proposing for it to be open from 6 p.m. to 10 p.m. only.

Cabales said the night market will help vendors recover from their losses during the months of lockdown.

In the past, the night market attracted residents from all walks of life who were on the lookout for bargains.

It helped revitalize the downtown area, which had been losing crowds to the malls that have cropped up all over the metro in the last 27 years.

A stream of shoppers was always guaranteed since the night market operated when the city was in its most festive mood for the Christmas and the Sinulog celebrations.

Citing Lucero, Cabales said the night market is not covered by the memorandum instructing local government units to clear roads of obstructions.

SunStar Cebu tried to reach Lucero, but to no avail.

Cabales said the proposal only needs the approval of Mayor Edgardo Labella.

City Councilor Renato Osmeña Jr., chairman of the market committee, suggested having the night market operate all year round, as this would benefit the vendors.

For this to materialize, the City will have to allocate a space for the vendors, adding that vendors are contributors to the city’s trade and economy, he said.

Osmeña has a pending legislation before the City Council to close P. Gullas St. to motor traffic and turn into a pedestrian lane where vendors can sell their wares.

A total of 250 street vendors who were displaced by last year’s clearing operations availed themselves of the City Government’s relocation program and agreed to transfer there.

The City Government suspended the operation of the night market last March 16 after the city was placed under general community quarantine to prevent the spread of the coronavirus pandemic. (JJL)