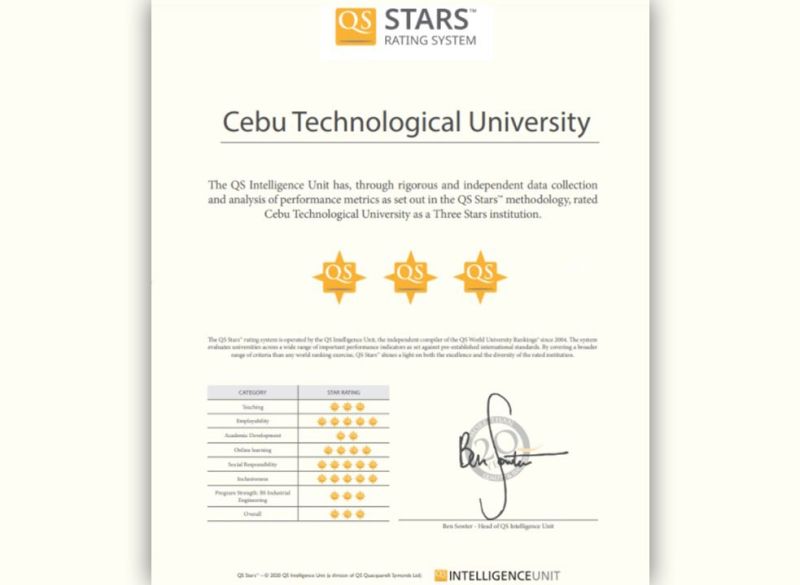 PROVING its drive to take the lead and deliver quality education to its stakeholders, the Cebu Technological University (CTU) made history by becoming the first university in Cebu to be awarded an overall rating of three stars by the Quacquarelli Symonds (QS) Stars team, a London-based independent compiler of the QS World University Rankings since 2004.

A year after the Commission on Higehr Educations (Ched)’s announcement on CTU's being one of the grantees of the “Fostering World Class Philippines Universities Project” in June 2019, the university geared up for evaluation by the QS Intelligence Unit (QSIU).

As per the agency's definition, a three-star university is nationally well recognized and may have additionally begun to earn global acknowledgment. More importantly, it maintains a respectable degree of exploration and its graduates are appealing to employers, hence CTU's grade of five stars specifically accorded to employability.

University personnel were quick to lobby congratulatory notes on the 19th via social media, underscoring CTU president Rosein Ancheta Jr.'s leadership since he took office in 2015.

Collective effort for QS evaluation began before the pandemic, and the result justified the university's trajectory consistent with the government's mandate for quality education. SPONSORED CONTENT