Alden celebrates 10th year in showbiz with a concert 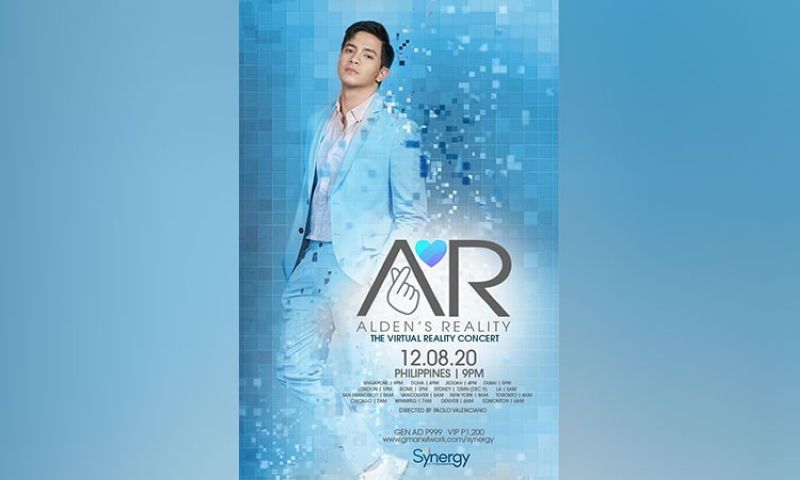 AS THE Asia's Multimedia Star Alden Richards celebrates his 10th anniversary in the entertainment industry, he is set to offer something "marvelous" to his fans on December 8.

Get a chance to witness a global event that will surely leave everyone in awe! The Kapuso actor would bring a spectacular event called Alden's Reality (AR), the first-ever virtual reality concert in Philippine entertainment industry.

In an online press conference on Saturday, the 28-year-old actor shared a glimpse of his yet another exciting project with GMA Network.

"Nakita ko na po kasi ang videos using the actual VR," he revealed. "I really didn't take it seriously while we were shooting it, because I was only having fun, but it came out marvelously."

Alden's upcoming VR concert will give his fans a chance to have a date with him even while on community quarantine. It's going to be a date like no other, because of combining cutting-edge technology and performances to produce a full-length concert and online interaction with their idol.

The AR, which is shot in 360-degree, will provide concertgoers a glimpse of how 10 years in the entertainment industry looks like for someone as successful as him, who underwent various challenges before reaping the fruits of his hard work.

The VR concert will feature both heartfelt songs and adrenaline-filled dance numbers from the multi-talented Alden. With the help of a VR device, fans will experience watching him like they are sitting on the front row without paying a hefty amount for the said seat. What's even more exciting is they can watch him right at the comforts of their home.

It's just simple to get a ticket to the show directed by Paolo Valenciano. Anyone can log on to www.gmanetwork.com/synergy. Buyers from the Philippines can avail themselves of a special VIP package at P1,200, which includes one general admission ticket plus one exclusive VR device to the AR show. The AR, which is produced by Synergy: A GMA Collaboration, a group that produces ticketed and non-ticketed events and activities catering to all Filipinos across the globe, will start streaming online at 9 p.m. of December 8 (Philippine time).

Meanwhile, when asked what he plans to do once the pandemic is over, Alden disclosed the two things he will definitely consider doing right away.