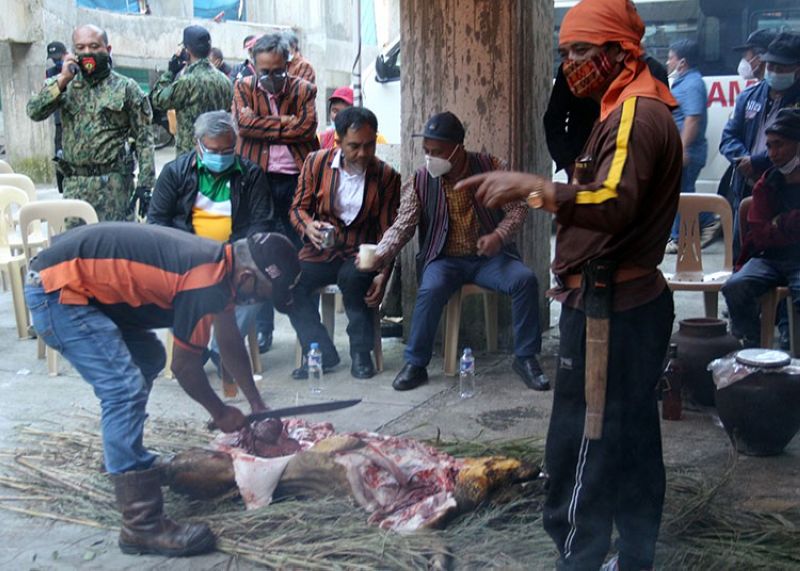 OWIK. Native pigs were butchered while a "mambunong" holds a ritual to inform Kabunyan and their ancestors there were no grand celebration of Benguet's founding anniversary due to the Covid-19 pandemic. (Lauren Alimondo)

AMID the Covid-19 pandemic, Benguet celebrated its founding anniversary on Monday, November 23.

Governor Melchor Diclas in his speech acknowledged former leaders of the province for their service and expressed for peace in the province to prosper.

The 120th founding anniversary of the province kicked-off with an ecumenical mass led by at least 10 priest and ministers.

The program was followed by the awarding of the Benguet Roadside Beautification Program, Model Livestock and Poultry Raisers with Integrated Farming System and Best Practices Program Implementing Municipality and Barangay Recognition and Awarding Ceremonies.

Benguet province is home to the most peaceful Ibaloi, Kalanguya, and Kankana-ey tribes.

There will be no celebration of the Adivay, an Ibaloi term that means "coming together" which was first celebrated back in 2005. The celebration gathers all 13 towns of the province with a focus on the products and culture of municipalities.

In the previous years, more than 20 pigs are butchered to feed guests and stakeholders from the 13 towns of the province.

But during Monday's celebration, only eight pigs and a cow was prepared, the governor added.

Traditional dances such as the 'bendiyan' and 'tayaw,' and the sound of gongs that reverberates every year calling for a celebration were not performed due to the ongoing Covid-19 pandemic.

But the people of Benguet called for the Kabunyan (god) and its Benguet ancestors to protect them from the challenging time.

Mambunongs (priest) Uybaan Liwan and Mayo Yadis performed the ritual 'lubon' (Kankana-ey, Kalanguya term) informing the Kabunyan and their ancestors there was no grand celebration in the province due to the ongoing pandemic.

Traditional 'owik' (butchering of pigs) were performed but with a lesser number of pigs offered unlike in the past years where more than 20 are simultaneously offered.

Both elders also asked Kabunyan for the people of Benguet to protect from coronavirus disease (Covid-19).

It was on November 3, 1999, when Provincial Ordinance no. 99-58 was passed setting the Benguet Foundation Day to November 23 every year starting 2000.

Benguet lawmakers said the celebration reflects the historical events in the province being the date where the civil government of the province was established by virtue of Act 49 dated November 23, 1900.