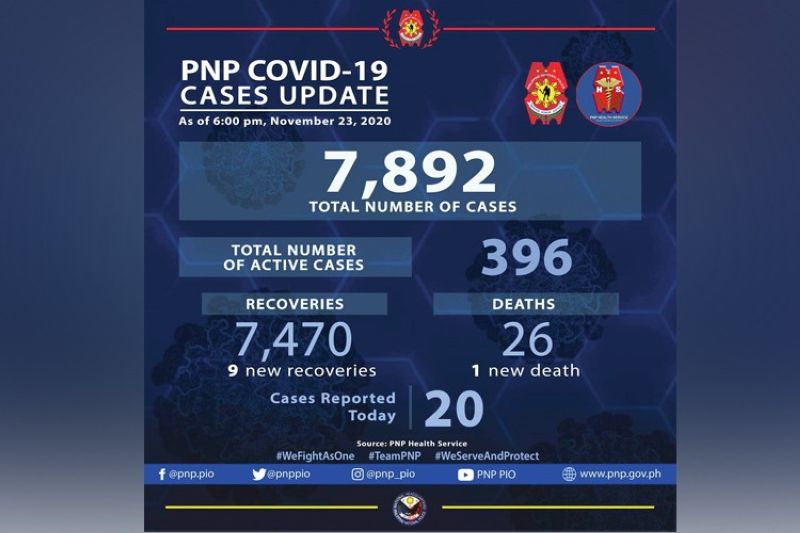 FINANCIAL assistance will be given to police officers who contracted Covid-19 while doing their duties on the frontlines against the pandemic.

Each of the police officers who tested positive for the new coronavirus will receive P50,000 from their regional offices.

On the other hand, a police officer who landed in the hospital in the line of duty will receive financial assistance of P100,000.

These were included in the order of Philippine National Police (PNP) Chief Debold Sinas released by Camp Crame on Tuesday, Nov. 24.

The CCPO has the most number of police officers who got infected with Covid-19 in Central Visayas in the middle of the year when the city was considered a hotspot because of the surging cases at the time; however, since October, not a single police officer in the region has been infected with the new coronavirus.

Two of the four police officers in Cebu who succumbed to Covid-19 were members of the CCPO.

The police official told Superbalita Cebu that the financial aid is a “very big help.”

Ferro was not surprised by Sinas’ order to send aid to police officers who fell ill with Covid-19, saying the latter always takes care of his personnel’s welfare.

Camp Crame also ordered all regional police directors to visit their wounded or injured personnel in hospital aside from giving the P100,000 in financial aid.

As to the PNP’s yearend bonuses and cash gifts, Sinas said these have already been credited to the payroll accounts of officers and enlisted personnel.

“The PNP through the Finance Service has rolled out P7,988,196,040.32 to pay for the 2020 yearend bonuses and cash gifts of 215,571 PNP personnel who are qualified to receive this mandated financial windfall that is now credited to their individual ATM payroll account with Land Bank of the Philippines,” Sinas said in a statement late Monday, Nov. 23.

He said the bonuses for those facing administrative charges and serving suspension were deferred.

Meanwhile, Sinas reiterated his earlier pronouncements that he is leveling the playing field for female commissioned police officers in terms of promotions to key leadership positions in the PNP.

He said his directive will apply in all aspects of command administration, from recruitment to selection, promotion and placement.

“I am leveling the playing field for placement of police commissioned officers to key positions by providing equal opportunities for women. In fact, we are empowering more women to take on command assignments that traditionally have been the domain of their male counterparts,” he said.

“Gender equality will be given premium, and due consideration for seniority, merit and competence shall be strictly observed,” he added.