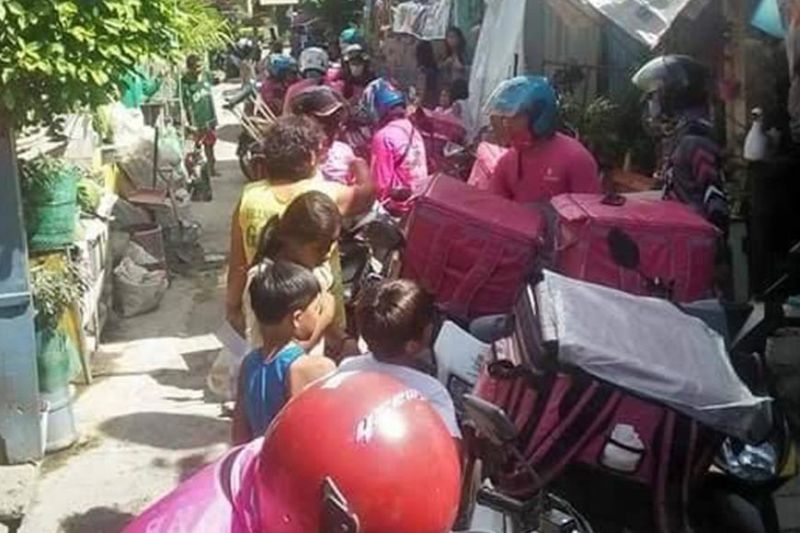 DELIVERY BLUES. Around 42 Foodpanda riders flock to Barangay Mabolo, Cebu City on Wednesday morning, Nov. 25, 2020 to deliver boxes of chicken fillet ordered by a seven-year-old girl. The girl’s neighbor, Dann Kayne Suarez, described the multiple orders as accidental and were caused by a glitch on the app when the internet was lagging. (CONTRIBUTED, JED ALERTA)

A SCHOOL-AGED girl’s single tap on a food delivery app to order a box of chicken fillet became multiple taps, thanks to a snail-paced internet connection and the app’s reported erratic behavior.

In a narrow street in Barangay Mabolo, Cebu City past 11 a.m. Wednesday, Nov. 25, 2020, around 42 Foodpanda riders arrived at the place to deliver boxes of two-piece chicken fillet accidentally ordered by a seven-year-old girl.

A neighbor, Dann Kayne Suarez, narrated the incident on his Facebook Live.

The riders of Foodpanda, a popular mobile food delivery marketplace, delivered the accidental multiple orders of the girl, who repeatedly tapped on the Foodpanda app’s order menu after there was a lag in the internet connection.

Each box of chicken fillet also contains rice and french fries, and it costs P189. If each of the riders delivered one box, the total amount that the girl’s parents were supposed to pay was P7,938.

However, Suarez said, there were riders who brought two or three orders to the girl’s residence in Our Lady of Remedy St.

The girl’s parents left her a smartphone so she can order food online for herself and her grandmother. Her parents were at work.

Suarez told Superbalita Cebu that the girl knew how to use the app as she had been taught by her parents and she had also made orders before. The slow internet connection caused the glitch in the app, he said.

The arrival of the Foodpanda riders in the neighborhood stunned Suarez and his neighbors.

The girl felt fear and cried, possibly by the thought of that she and her grandmother cannot eat all the chicken fillet or by the reality that her parents had only left her money to pay for a single order.

“Nihilak tawon ang bata. Luoy lagi, wa man siya kabalo (The child cried. I pity her because she did not know what had happened),” Suarez said.

After realizing the story behind Foodpanda riders’ pilgrimage to a small street in Mabolo, Suarez said the girl’s neighbors, including him, resolved the situation by buying boxes of chicken fillet.

However, some Foodpanda riders left Our Lady of Remedy St. empty as the girl’s neighbors failed to buy all the orders.

Superbalita Cebu tried to get the side of Foodpanda management, but no reply from them.

Suarez himself bought boxes of chicken fillet so some riders can leave the place not upset.

The seven-year-old girl and her grandmother also had a happy-ending—they were able to fill their stomach with chicken fillet. (ANV / KAL)