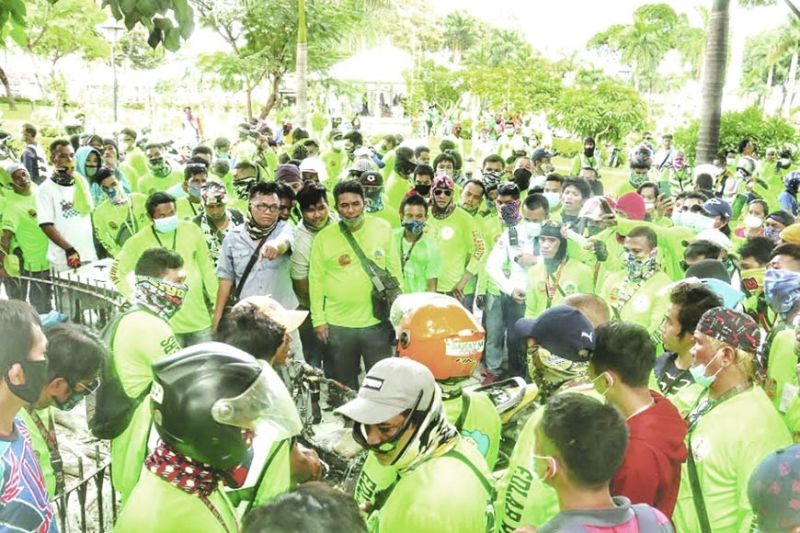 Her legal counsel, Vincent Isles, said, however, that Beltran’s complaint is not a “counter attack” against Labella, but a simple attempt to maintain the rule of law.

Beltran’s complaint, filed on Nov. 24, 2020 before the Office of the Ombudsman, accused Labella of violating City Ordinance 2566, grave misconduct and conduct unbecoming of a public official.

Beltran said Labella had allowed a mass gathering attended by “hundreds of supporters” on Nov. 8 in Plaza Independencia, considered an offense under City Ordinance 2566 which penalizes any violation of community quarantine rules.

Cebu City is under modified general community quarantine (MGCQ) until the end of November.

The EdLab Riders event initially escaped public attention. Beltran said both the authorities and the public were focused on the shoe sale incident on Nov. 11 in Barangay Lahug.

After the shoe store was shut down on the same day that it opened and held the sale, photos of the EdLab Riders gathering began circulating on social media and netizens demanded that the authorities also take action against the group, Beltran said.

Citing a report by another local news outlet, Beltran said the mayor stated that he does not condone the actions of his supporters and the organizers should be made to answer for the incident.

Beltran alleged that Labella knew about the gathering in the first place. She cited a screenshot of a Facebook post on Oct. 22, announcing that Labella will deliver a speech during the association’s anniversary celebration.

She alleged that Labella, indeed, delivered a speech during the event through a recorded message.

“Here, it had been clearly and sufficiently shown that respondent Mayor Labella actively participated in the actual planning, and eventual holding of the mass gathering of hundreds of his supporters in Plaza Independencia on Nov. 8, 2020, an event that did not observe the restrictions on mass gatherings and where physical distancing was not also observed,” stated Beltran.

In an interview Wednesday, Nov. 25, Labella denied having had a hand in the event.

“I never had a hand. They were volunteers. Most of them, if not all, are from the mountain barangays,” Labella said.

He said he did not go to the event and instead sent City Administrator Floro Casas Jr. to advise the participants to disperse.

As of Wednesday, the mayor said he has yet to receive a copy of the complaint. He said he will answer it in the right forum.

In her complaint, Beltran accused Labella of having double standards.

“In front of the public, he wants to portray himself as a leader who does not tolerate any violation of his executive orders,” stated Beltran.

Beltran was arrested in April over her satirical Facebook post on the Covid-19 cases in Barangay Luz, Cebu City.

Labella, who posted on his Facebook page a screenshot of Beltran’s post, described it as “fake news” and said it was a criminal act.

In September, the Municipal Trial Court in Cities dismissed the charges filed against Beltran. (JJL)