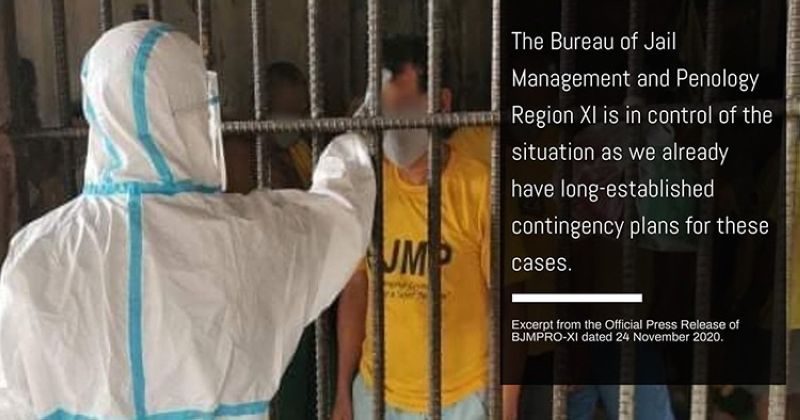 In an issued statement, the eight were among the 10 PDLs who underwent swab testing on November 21 as one of the requirements prior to their transfer to the rehabilitation center.

One of the eight was a patient who died on November 19 prior to the release of the results of the test.

BJMP-Davao said the PDL was brought to the Southern Philippines Medical Center (SPMC) on November 15, 2020, "due to difficulty of breathing and was diagnosed to have pulmonary congestion secondary to end stage renal failure."

"Prior to his hospitalization, this PDL was already separated from the general population since he belongs to the vulnerable group. The vulnerable group was kept in isolation even before the release of the RT-PCR (reverse transcription polymerase chain reaction) test results; this is part of the Covid-19 Management of the Jail Facility," BJMP-Davao said.

It also said close contacts of the coronavirus-positive PDLs were already isolated and placed under quarantine and will be monitored regularly.

In addition, 137 PDLs who have close contact and with mild symptoms were tested and are now placed under quarantine and constant monitoring.

"There is already coordination with the Regional Covid-19 Task Force for the contact tracing and case investigation among PDL and personnel," they said.

BJMP-Davao also said acceptance of newly committed PDLs are also temporarily suspended "until the situation is cleared and pacified."

The jail management is now coordinating with different health officials to address the situation.

"The Bureau of Jail Management and Penology is in control of the situation as we have already long established contingency plans for these cases," BJMP-Davao said.

In a forwarded message to the media, BJMP-Davao spokesperson Jail Inspector Edo Lobenia said they will be releasing updates on their official Facebook page every now and then. (RGL)