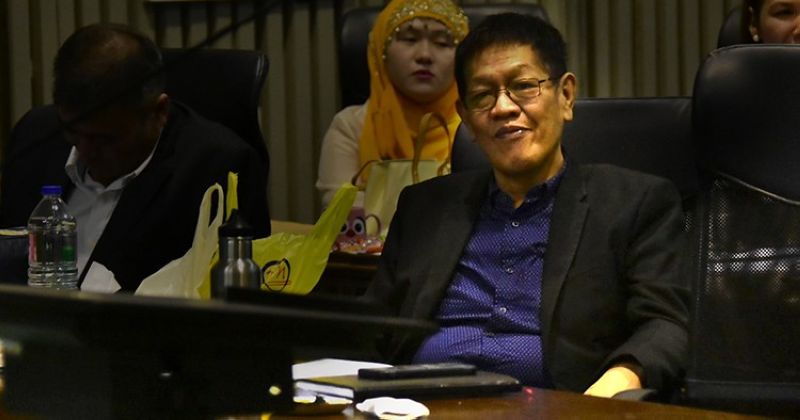 FORMER and present Davao City councilors paid their last respects to the late Councilor Victorio "Bong" Advincula Jr., who passed away on November 17, 2020.

Councilor Bai Hundra Cassandra "Sweet" Advincula, during her privilege speech on Tuesday, November 24, thanked those who extended their sympathy to their grieving family.

The younger Councilor Advincula spoke for the first time since the passing of her father, whom she replaced after the latter ended his political stint in mid-2019.

The councilor said her father passed away at 7 p.m. on November 17 and was surrounded by his family in his final moment.

She said the late councilor was supposed to have an angioplasty surgery on Sunday, November 22, but his heart "plagued earlier."

"Even though he left us earlier than we hoped for, we find solace that the Lord blessed him in death as he did not suffer in his final moments. He just slept. For us, that is a peaceful and restful passing which is not given to many," she said in her speech.

Advincula disclosed her closeness to her father, who she described as a "kind and loving father and husband".

"There are no unresolved issues between us, even among our siblings. He is the best father that we could ever hope for. Even if he is not perfect but he is a perfect father for us," she said.

Despite his brief stint in public service, Advincula said she knew her father "made an impact" in Davao City, particularly to their constituents in the third district.

The late councilor served for three terms from 2010 to 2019, where he substituted his father, former Councilor Victorio Advincula Sr.

Sweet Advincula replaced her father in 2019. She serves as the current committee chairperson on housing and subdivision development under Batas Pambansa Blg. 220 (medium-end projects) of the 19th City Council.

Meanwhile, she thanked the public for the "friendship and kindness" shown to her father "during his lifetime.”

"On behalf of the Advincula family, please allow me to extend my gratitude to all who extended your sympathy and generosity to our family in this time of sadness," she said.

"You're a good man. May you rest in peace. Our family extends our condolences and prayers to the Advincula family. God bless you, sir," Mahipus said in his Facebook post.

"RIP (Rest in peace) former Councilor from 2010-2019 Bong Advincula Jr., son of Vic Advincula, my colleague from 2001-2010 and one of the longest-serving members of the City Council dating to pre-ML (Martial Law) era. Thanks for your service bay!" former Councilor Peter Laviña said in his Facebook post.

"Sir Bong, thank you for everything. You made my City Council memories special. You made everything easier for me. You mentored me well in drafting legislation. You guided all the neophyte councilors and impressed us with your humility despite your expertise in lawmaking. You treated me like your daughter inside the City Council," Sudagar said.

Former councilor and City Vice Mayor Bernard Al-ag also shared their moments back when both of them started their career in public service together, and also retired at the same time in mid-2019.

"We were colleagues for nine years in the Davao City Council. Many times we agreed on issues, but sometimes, we also disagreed. A good lawyer, a hardworking public servant, a loyal friend and an excellent family man," Al-ag said.