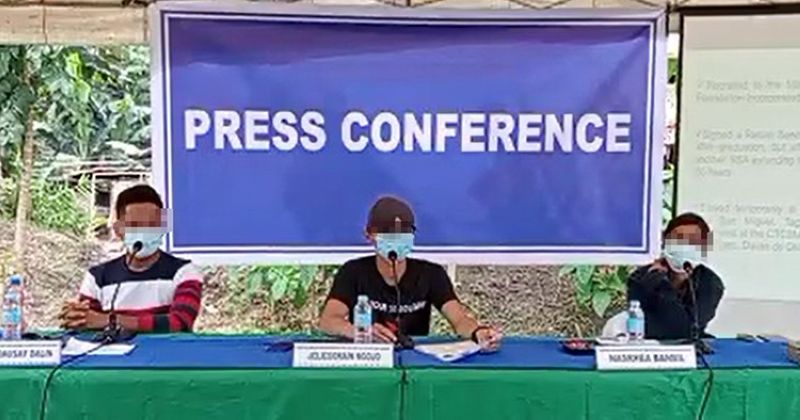 MORE than a week since they were captured, two former Mindanao Interfaith Services Foundation, Inc. (Misfi) scholars said they were recruited to serve in the New People's Army (NPA) as part of their "return service agreement (RSA)."

Jeliegorain Ngojo and Nasrhea Bansil faced the press on Wednesday, November 25, wherein they confirmed the connection of Misfi to the terrorist group.

Ngojo and Bansil were captured by the 27th Infantry Battalion of the 10th Infantry Division of the Philippine Army on November 14 during an earlier encounter between government soldiers and the NPA in Sitio Quibolog in Barangay Mapula, Paquibato District.

The local government unit (LGU) of Davao City earlier issued a statement saying that the recent capture of "two young members of a terrorist group unmasked and exposed the true face" of Misfi and the Haran Center of the United Church of Christ in the Philippines in Davao City.

During the press conference, Ngojo, a resident of Tulunan, North Cotabato, said they were made to serve in the Misfi schools for five years after he graduated in 2017.

As scholars, he said they were allegedly made to sign an RSA contract binding them to serve and volunteer with organizations allied with the scholarship donor.

"Bag-o namo makuha amo TOR (Transcript of Records) and diploma dapat namo tiwason ang RSA (Before we would be able to get our TOR and diploma, we needed to finish our RSA)," he said.

He served as a teacher in the Mindanao Community Agricultural School Inc. (Mcas) in Bukidnon for a year, before he was promoted as executive director of the school.

In early March 2020, Ngojo was sent by Mcas as a representative in a "summing up" meeting together with Misfi's affiliated school, including Salugpungan Ta'Tanu Igkanogon Community Learning Center.

He said the meeting was organized by a unit of the NPA, where there was a plan to "self preservate" the teachers of the affiliated schools.

(Since they already saw that the lumad schools will be shut down by the government, they were trying to preserve the affected teachers so when they are able to open another school, they would be able to redeploy them.)

This had made him confirm that Misfi has a "close" connection to the NPA.

"Maka-conclude ko nga part ni sa NPA ako gisudlan. Narecruit ko sa NPA (I could conclude that this is part of an NPA activity. I was recruited to be an NPA)," he said, adding that other RSA teachers were converted as revolutionary integration (RI) of the group.

During his stint, he was the group's supply officer.

Bansil, another Misfi scholar graduate in 2019, also confirmed the Misfi's involvement with the communist group.

She was also deployed to Mcas as a finance officer before she was also converted as an RI where she served as a medical officer.

Arnold Dalin, a lumad student of the Community Technical College of South-eastern Mindanao Inc (CTCSM), also said their school has been used by the Communist Party of the Philippines-NPA-National Democratic Front in spreading their idealisms.

(CTCSM is the mother school of other IP or Lumad schools of Salugpungan, Misfi, and AIAFI. If these schools will be shut down, we have other schools to go to. CTCSM was established as an alternative school for students, where they will be taught the radical ideologies of the CPP-NPA-NDF.)

Meanwhile, Save our Schools (SOS) Network, a non-government organization that supports IP and lumad schools, is calling for the immediate release of Ngojo and Bansil.

SOS claimed that the two Misfi scholars were “illegally” arrested by the government army.

The group condemned the Eastern Mindanao Command for posting their faces online, which were “were paraded to the public”, and “bereft of due process”.

“SOS Network condemns this repeated attempt of subjecting said teachers to trial by publicity, without giving them the opportunity to counter the allegations raised against them. These malicious maneuvers repeat the same old lies and echo a dangerous -- yet unsubstantiated -- contention that Lumad school teachers are NPA recruiters,” SOS said in a statement.