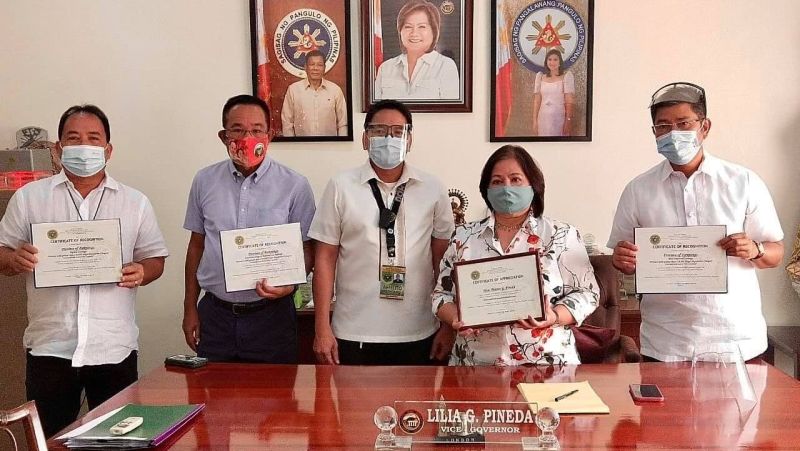 RECOGNITION. Vice-Governor Lilia Pineda receives the certificate of recognition from Dr. Amelito Nicolas of the Department of Health. With her (L-R) are board members Venancio Macapagal, Rosve Henson, and Ananias Canlas, Jr. (Pampanga PIO)

THE Department of Health (DOH) recently lauded the Provincial Government under the leadership of Governor Dennis Pineda for its exemplary contributions to the “Sabayang Patak Kontra Polio (SPKP)” program.

A total of 228,255 Kapampangan kids aged zero to 59 months received a free dose of polio vaccine during the second round of the SPKP program in the province.

The total number of Kapampangan children vaccinated with Monovalent Oral Poliovirus Type 2 (mOPV2) for the second round of the immunization program was seven percent higher compared to the first round, which was 213,703.

Dr. Amelito Nicolas of DOH commended the province for its accomplishment both in the first and second round of the SPKP program given the challenges brought by the Covid-19 pandemic.

He added that the province has been cited for “most improved coverage" for vaccinating more than 150,000 children.

"Pampanga has achieved 90 percent of the province's target coverage of 258,572 for the second round of immunization. It's a great accomplishment for the province and we really appreciate the efforts of the provincial government in our program," he said.

“The more patak, the more protection. Governor Pineda wants to boost the protection of our children especially now that we are facing a pandemic,” Yalung said.

Vice Governor Pineda, currently the acting governor, received the citation on behalf of Governor Pineda. She also thanked the DOH for the help given to the province.

The second round of the SPKP program started last September 14. It aims to further strengthen the health of children against the poliovirus. (Pampanga PIO)