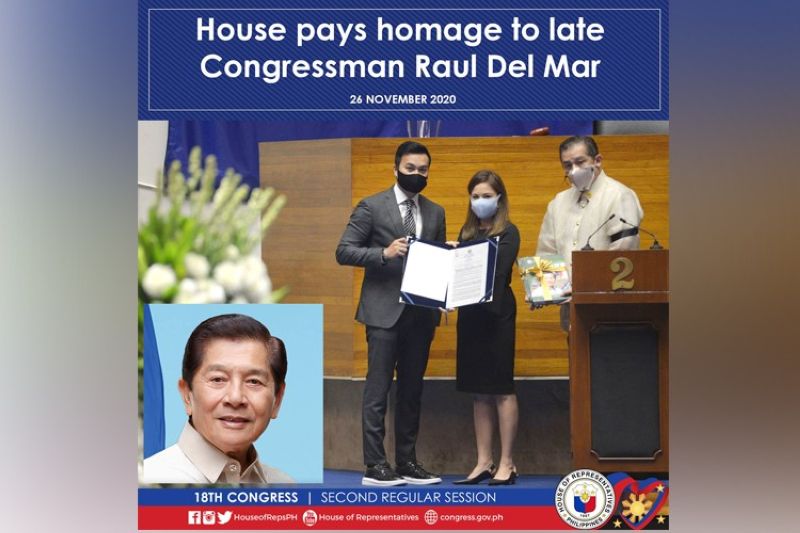 THE House of Representatives on Thursday paid tribute to the late Cebu City North District Rep. Raul V. Del Mar, who recently passed away at the age of 79.

Speaker Lord Allan Velasco led the necrological service for Del Mar at the plenary hall inside the Batasan Pambansa Complex in Quezon City.

The resolution was adopted by the House on Nov. 17, the day the news about Del Mar’s death broke out. He is survived by his wife, Melanie, and his three children, former Representatives Raoul and Rachel Marguerite, and Ryan Benjamin.

That same day, the House suspended its session early to allow its members to mourn the passing of Del Mar, who served as congressman for nine terms since 1987, including the present 18th Congress. Del Mar also served as Deputy Speaker for two terms from 2004 to 2010.

It noted that Velasco’s designation as caretaker was “upon the wishes of the late Rep. Del Mar, as communicated by his family and constituency.”

In his eulogy, Velasco hailed Del Mar as a “great leader, a humble public servant, and the pride of the Cebuanos.”

“He (Del Mar) was also a mentor to me, and with all the respect I hold for him, I would have made him one of my deputy speakers,” Velasco said.

According to the House chief, Del Mar left the legislative chamber with a large void to fill.

“To a man who never lost an election, attained perfect attendance for 27 years in Congress, crafted landmark legislations, rendered unlimited basic services to his constituents, Raul, you have toiled more than enough for the people you have served with all your heart,” Velasco said.

Del Mar was lawyer by profession and earned his Bachelor of Laws degree from the Ateneo de Manila University.

Hailed as “Cebu’s father of legislative infrastructure,” Del Mar is one of the distinguished veterans of the House who started his career in 1987 and has faithfully performed the duties and responsibilities as a member, serving a total of nine terms and 27 years as a legislator.

Del Mar holds the distinction of rendering perfect attendance during plenary sessions throughout his 27 years of service as House member, marked by active participation in floor deliberations and committee hearings.

His outstanding performance and achievements and his tireless efforts to attend all plenary sessions during his terms have earned him utmost respect from his colleagues and served as an inspiration to the members, officials and employees of the legislative body.

Del Mar authored 74 laws—two in the 18th Congress, eight in the 17th Congress and 64 in the previous Congresses. Among these are: Republic Act (RA) 11291, otherwise known as the Magna Carts of the Poor; RA 11458 or the “Expanded Sotto Law”; RA 10931 or the Universal Access to Quality Tertiary Education Act; RA 9262 or the Anti-Violence Against Women and Their Children Act of 2004; RA 9593 or The Tourism Act of 2009; RA 9513 or the Renewable Energy Act of 2008; RA 9189 or the Absentee Voting Act of 2003; RA 11037 or the Masustansyang Pagkain para sa Batang Pilipino Act; RA 9439 or An Act Prohibiting the Detention of Patients in Hospitals and Medical Clinics on Grounds of Nonpayment of Hospital Bills or Medical Expenses; RA 8344 or An Act Penalizing the Refusal of Hospitals and Licensed Medical Clinics to Administer Appropriate Initial Medical Treatment and Support in Emergency or Serious Cases; RA 7621 or the Charter of the Cebu Port Authority; and RA 6958 or the Charter of the Mactan-Cebu International Airport Authority.

Due to his exemplary achievements and contributions to the society, Del Mar has received numerous awards and citations, such as the Presidential Medal of Merit Award and Pro Deo Vitae Et Patria Award in 2007; Humanae Vitae Award and Papal Cross Croce Pro Ecclesia et Pontifice in 2010; and Outstanding Carolinian Alumni Award and The Outstanding Filipinos (TOFIL) Award for government and public service in 2018.

Del Mar was also active in socio-civic activities and held positions in the Cebu Chamber of Commerce and Industry, Cebu Jaycees and the Rotary Club of Cebu East. (PR)