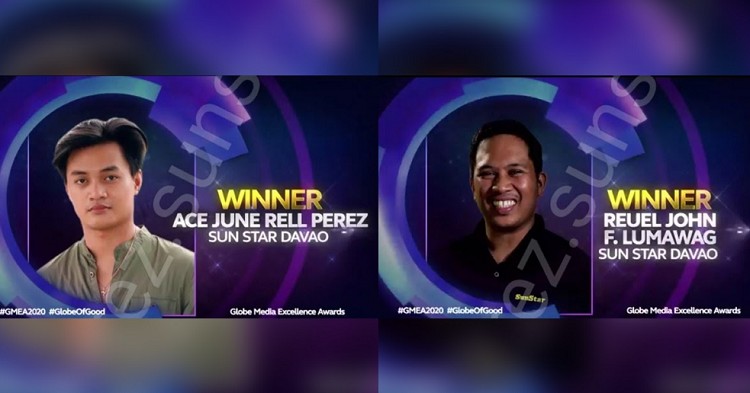 THE Covid-19 pandemic did not stop SunStar Davao from bringing quality news and stories that made an impact to the community, which were recently recognized at the Globe Media Excellence Awards (GMEA) 2020 on Thursday, November 26, 2020.

GMEA is an award-giving body that annually recognizes news stories in print, radio, TV, and most recently, social media that have left an impact on the community it serves. It also recognizes stories that bring to light current issues and situations that the community faces.

SunStar Davao editor-in-chief (EIC) Reuel John Lumawag was also solely nominated as the Editor of the Year Award this year.

Other nominations for SunStar Davao include photojournalist Christian Mark Lim's two photo entries "Pandemic busking" and "Quiet Davao" for Photo of the Year for Digital category; social media content provider Mark Perandos' entry "How to spot fake news" as the Social Media Advocacy of the Year; "No learner left behind" by editor Jennie Arado and "Prostitution amid Covid-19" by reporter Ralph Lawrence Llemit for the News Report of the Year for Print.

Lumawag said the recent wins of SunStar Davao in the GMEA serves as an inspiration to the whole team.

"It reminds us of our commitment to write the stories and inform our community," he said.

Despite the challenging year, the SunStar EIC said this encouraged them to work harder to deliver news and stories to the community it serves.

"We would also like to thank Globe for recognizing the role of the community media in ensuring that the public remains informed of what is happening around them and serving as the voice of the community they serve in," Lumawag said.

Perez, meanwhile, said he also shares his recent feat with his news source "who willingly shared their story."

"I personally believed that their stories are worth telling. I hope that through these reports changes for the better will be made. The awards are never the end goal. The end goal is for these stories to create a desirable impact on our community, and call people and government into action," Perez said.

GMEA was first established in 2012 "to promote freedom of the press and media excellence by recognizing media practitioners who demonstrate excellence in their field of work."