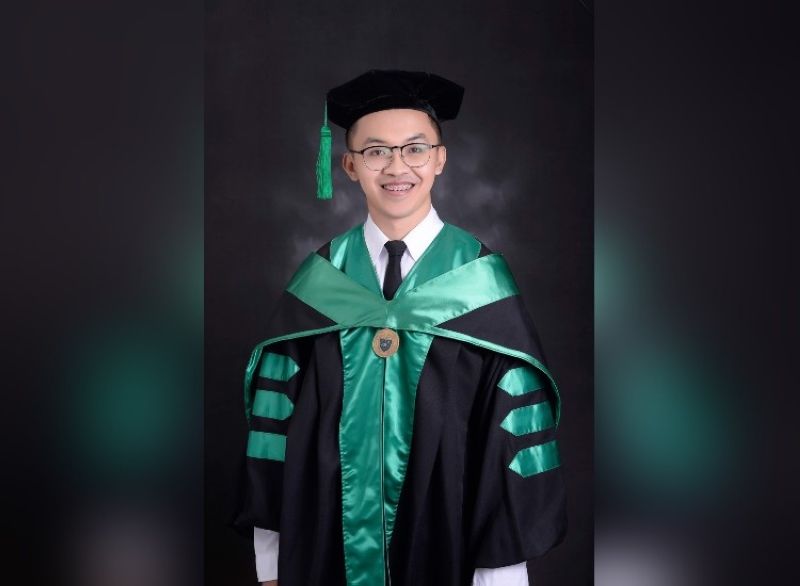 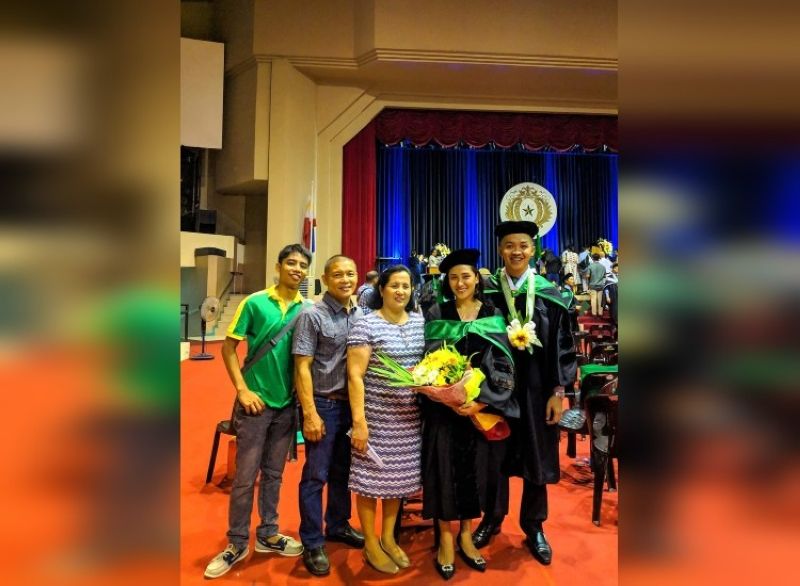 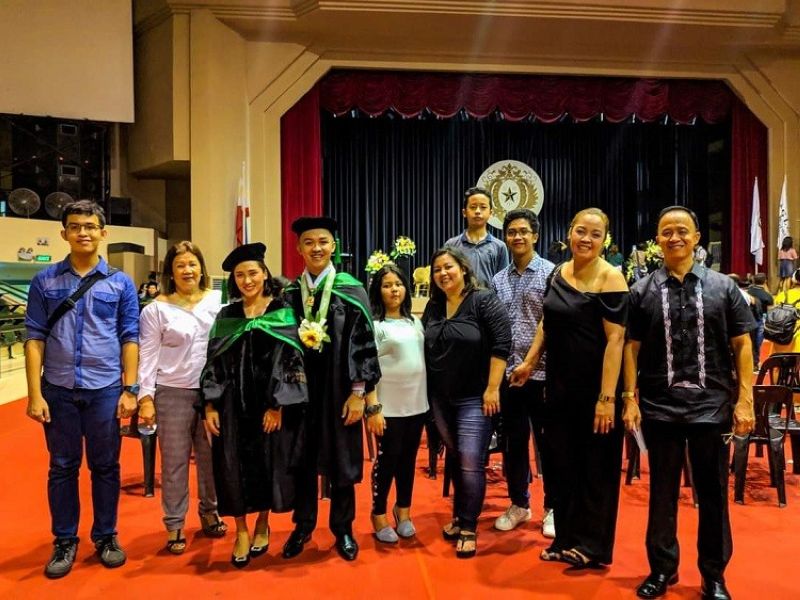 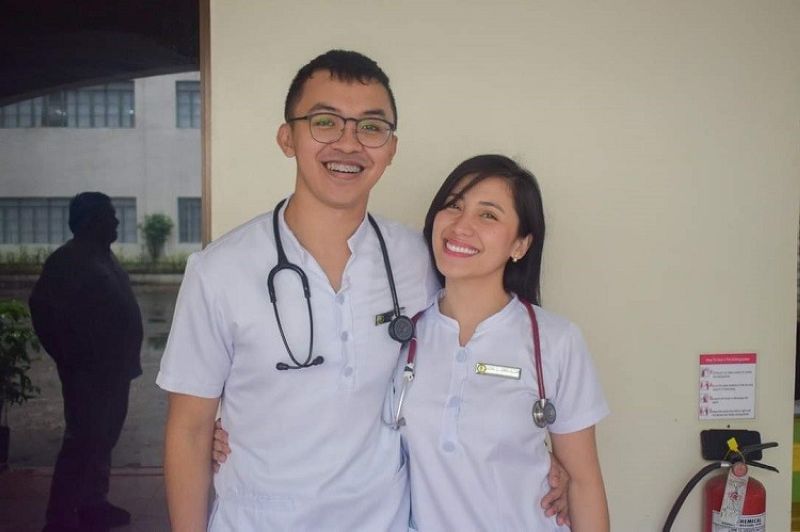 BACOLOD. (L-R) With his fiancée's cousin Ace Solinap, her parents Celito and Analyn Dimalaluan, and his fiancée Dyan. (Contributed photo) 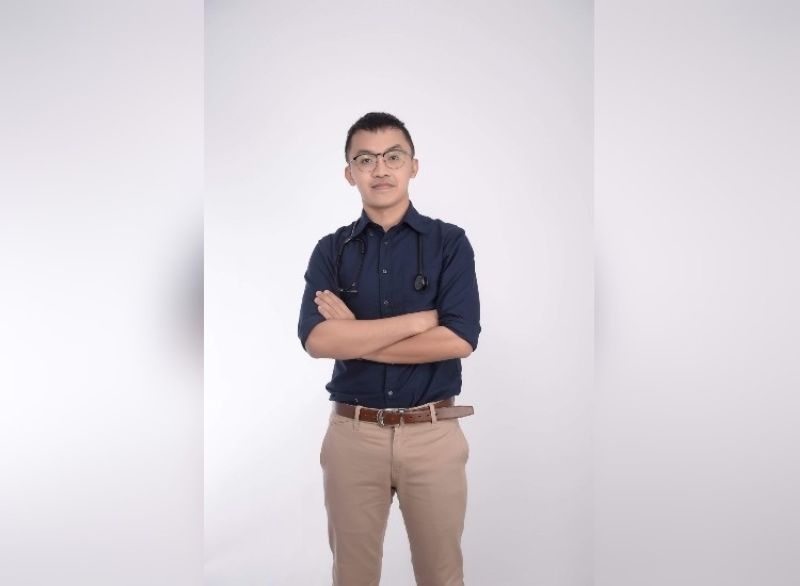 A SON of a bemedalled police officer who is a government scholar has landed as the second topnotcher in the recently concluded Physician Licensure Exams held in November 2020 with a striking record of 88.58 percent.

The new achiever is Dr. Patrick Joseph Mabugat, graduate of Medicine at the University of St. La Salle Bacolod and the eldest of four sons of Police Colonel Calixto Mabugat, who currently serves as the chief of staff of the Internal Affairs Service at Camp Rafael T. Crame in Quezon City and former chief of police of Kabankalan City, Silay, Himamaylan and Pulupandan, a former officer-in-charge of Bacolod City Police Office and a member of Task Force Ilahas of the Negros Occidental Provincial Police Office.

His proud parents Colonel Mabugat and spouse Arlene Mabugat and his siblings Paolo, Donne and Lance have considered his achievement as an "unspeakable joy" as God has blessed him in attaining success in his chosen profession.

With his achievement, he is prepared to face his future head-on after earning a license.

He plans to get married to his fiancee, Dr. Dyan Dimalaluan, who likewise passed the physician's licensure exams.

"We are happy with him as he has equipped himself to face the future. He has enough knowledge and experience to aid him in the next level of his career," he said.

Dr. Mabugat also topped the Medical Technology licensure exams in 2014, finishing his course from the University of Negros Occidental Recoletos-Bacolod before he pursued Medicine.

"With his achievement, we have allowed him to pursue whatever he wants in life as his academic achievement showed how committed he is to follow his dreams. But before, he just wants to become a medical technologist and plans to join the forensic service either with the PNP (Philippine National Police) or NBI (National Bureau of Investigation), as he likes to dwell on crime scene investigation. I thought, after his first course, he will already work. But then, he again pursued medicine and now, he has reaped what he sowed with his passing the physician's licensure exam," his father said.

Colonel Mabugat said they will support his son's next plans as long as he is determined to accomplish it.

The father asked the younger Mabugat to continue to strive for excellence in his chosen profession and always put God first in all he does and everything will be guided.

"As long as you anchor your plans to the Lord, everything will be added unto him. Let us submit everything to the Lord so that the Lord can do the rest," the father said, adding that his son should stay humble and always put his feet on the ground.

In 2023, the older Mabugat will be retiring from the government service and it will be time for his son(s) to continue the service that he has started being a police officer for 25 years now.

Dr. Patrick is thankful for the untiring support of his parents in his chosen path.

He has never imagined that he could achieve this far as he just aimed to pass the exams.

He is also grateful that his fiancee Dr. Dyan also passed the exams and that they are both grateful for what they have achieved together.

He will still pursue his residency for another four to six years as he plans to finish his studies and also get married to his sweetheart Dr. Dyan either next or the year after next.

He thanked everyone who helped him along the way to achieve his dreams and goals.