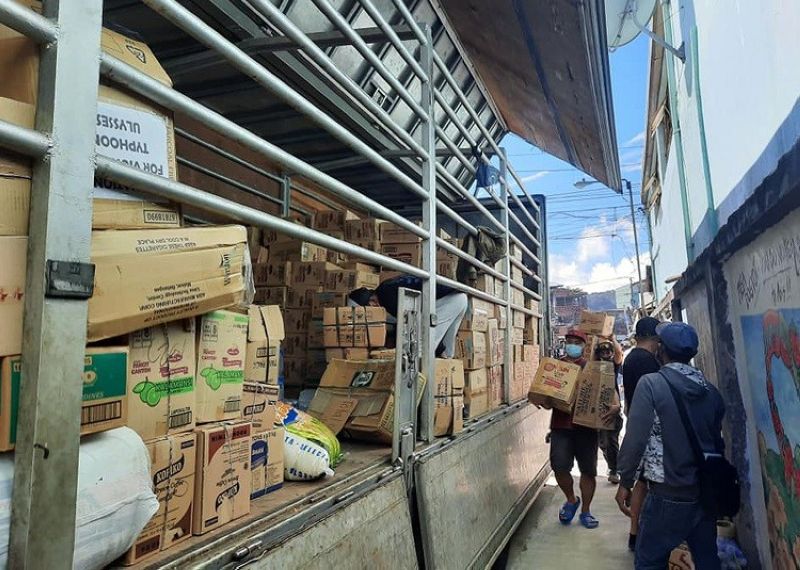 BAYANIHAN. The League of Associations in La Trinidad Vegetable Trading Post, one of the biggest vegetable trading areas in the country, raise P300,000 to purchase food donated to the typhoon victims of Cagayan. The relief goods were delivered Monday evening. (Brenda Shagol)

DIFFERENT stakeholders in Benguet recently pooled resources as donations for Cagayan, Isabela, Albay to aid the provinces’ recovery from typhoons Rolly and Ulysses.

Members of the League of Associations at the La Trinidad Vegetable Trading Post, the umbrella organization of vegetable stakeholders in the country’s busiest vegetable trading area, delivered the collected donations during Benguet’s foundation day.

“Little by little, at least we were able to raise money and help Cagayan,” Ganase added. “We have members of the league who are also selling in Cagayan. Our members selling in trading post asked for the people of Cagayan to be also given aid because of what happened. In celebration of Benguet Foundation Day on November 23, we decided to give the donations.”

A 10-wheeler truck carrying the relief goods reached five most affected barangays in Cagayan. Instead of vegetables, food and clothes were donated.

In La Trinidad, the youth council also raised P100,000 from residents for donations to the Typhoon Ulysses victims in Sta. Maria, Isabela.

Members of the Benguet Provincial Government Employees Association also launched a project ‘Albayanihan: Binnadang for Albay’ where clothes, food and water, including vegetables, were donated to victims of Typhoon Rolly and Ulysses in Albay.