6 cops face dismissal over killing of 4 soldiers in Jolo 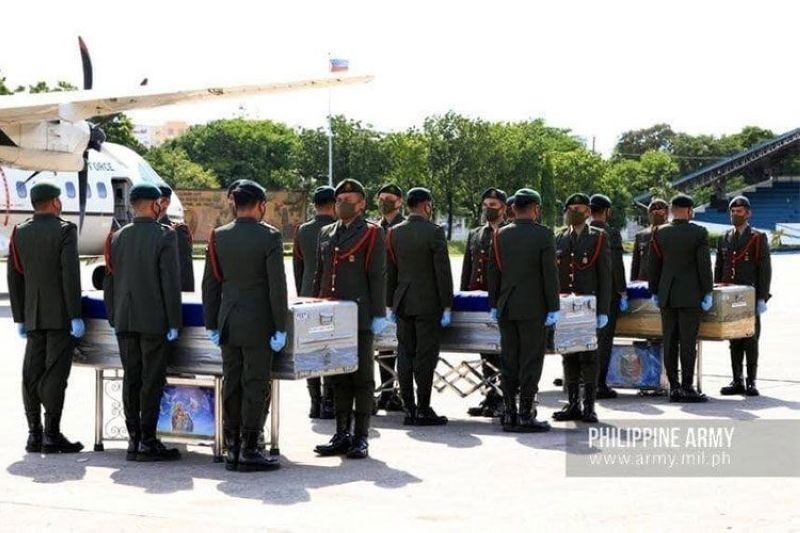 MANILA. The remains of the four soldiers killed at a police checkpoint in Jolo, Sulu are brought home. (Philippine Army)

Three others who were also manning the checkpoint were recommended for suspension of 50 days.

Staff Sergeant Almudzrin M. Hadjaruddin, Patrolmen Alkajal J. Mandangan, and Rajiv G. Putalan, who were assigned at the Provincial Drug Enforcement Unit (PDEU) of Sulu, were found guilty of less grave neglect of duty and recommended for suspension of 50 days.

Annayo was gunned down by unidentified men in Maguindanao on November 21, 2020.

Triambulo said Annayo was aware of the said intelligence operation being conducted by the army personnel in the area against two suicide bombers because he was part of the planning of the Task Force Jolo.

The shooting incident on June 29 killed Major Marvin Indammog, Captain Irwin Managuelod, Sergeant Jaime Velasco and Corporal Abdal Asula, who were on an official mission then against alleged suicide bombers in Jolo, Sulu.

(There was an altercation between the police and the four military intelligence officers. The nine policemen thought they were under surveillance.)

Triambulo said they have already forwarded the recommendation to the Directorate for Personnel and Records Management for the approval of PNP Chief Debold Sinas.

If Sinas approves their recommendation, the police officers may file an appeal before the National Police Commission.

The National Bureau of Investigation also filed murder and planting of evidence charges against the nine policemen before the Department of Justice.

Police initially claimed it was a “misencounter” but the Philippine Army, enraged by the death of the four soldiers, said the soldiers did not fire a single shot.

The incident prompted President Rodrigo Duterte to visit the troops in Zamboanga and, later, in Jolo to pacify them and prevent any hostilities from breaking out between the police and military. (SunStar Philippines)