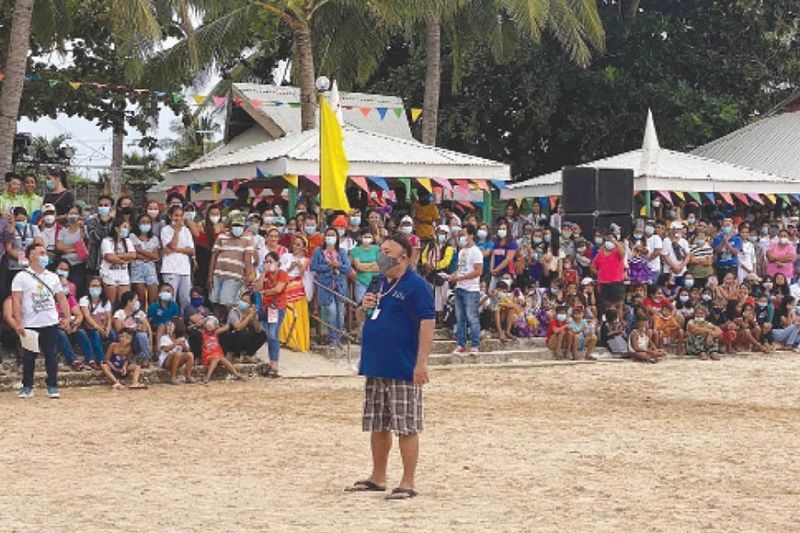 “We will make sure that a fact-finding investigation will be conducted to determine culpability,” Año said in a television interview.

Roque spoke before a large crowd during the opening of the Bantayan Island Airport and the welcome ceremony of Suroy-Suroy Sugbo SMB (Sta. Fe, Madridejos, Bantayan) Escapade in Madridejos Kota Park on Friday, Nov. 27.

Photos that circulated online showed that the crowd did not observe physical distancing. Some people did not wear face masks.

Roque said he was merely invited to the event, which was organized by the Cebu Provincial Government, the Mactan-Cebu International Airport Authority and the Department of Tourism 7. But he is open to any investigation, he said.

“The activity where I was seen speaking before a crowd was organized by the local government, which I had no control as a guest,” Roque said.

“I was later informed that the local official/s mentioned in interview/s that they did not expect the huge turnout of people as well,” he added.

He said he reminded the people not to remove their masks as a preventive measure against the coronavirus disease 2019 (Covid-19).

“We tried to control the crowd. In fact, we even closed Kota Park’s gate. We also reminded them about social distancing. However, we were not able to control them when the visitors arrived,” Dela Fuente said in Cebuano.

Aside from Roque and Gov. Gwendolyn Garcia, candidates of the Miss Universe Philippines 2020 also attended the event.

“However, when they ate they had to take off their masks. Plus, the event took place outdoors by the beach,” he said in Cebuano.

The mayor assured that the incident will not happen while the province is under community quarantine.

“Next time, we will strictly implement our advisories and a similar incident will not happen again),” he said.

Meanwhile, the DILG will also look into the photo uploaded by Sen. Emmanuel Pacquiao’s wife Jinky on Instagram, which showed a large crowd listening to the senator deliver a speech in Batangas.

In a statement issued by Pacquiao’s special assistant Jake Joson, the senator’s camp also welcomed any investigation on the matter. They noted that all those who attended the event were wearing face masks and face shields.

“We welcome any investigation related to claims that quarantine protocols were violated when we went to Batangas to distribute relief and early Christmas gifts for the people who have suffered so much during the Taal Volcano eruption and the series of typhoons that hit Luzon (recently). Before that, we also distributed relief and financial aid for the fire victims in Bacoor (Cavite) and flood victims in Rizal province and in Marikina City,” he said.

Año said both incidents will be investigated and those responsible will be held liable.

“We call on everybody, including government officials: If you cannot enforce health standards, especially physical distancing, during your activities, stop it. Don’t push through with it. You cannot just say ‘sorry’,” he said in Tagalog. (TPM / SunStar Philippines with NDT)