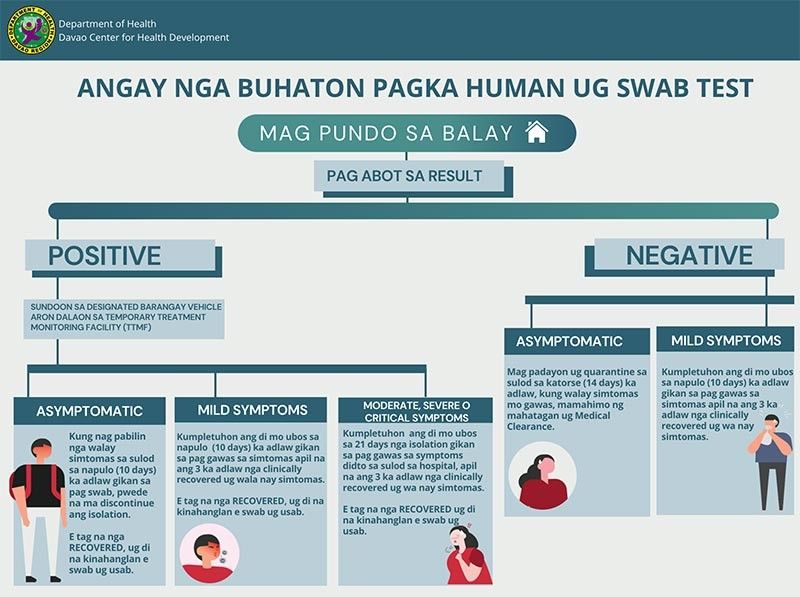 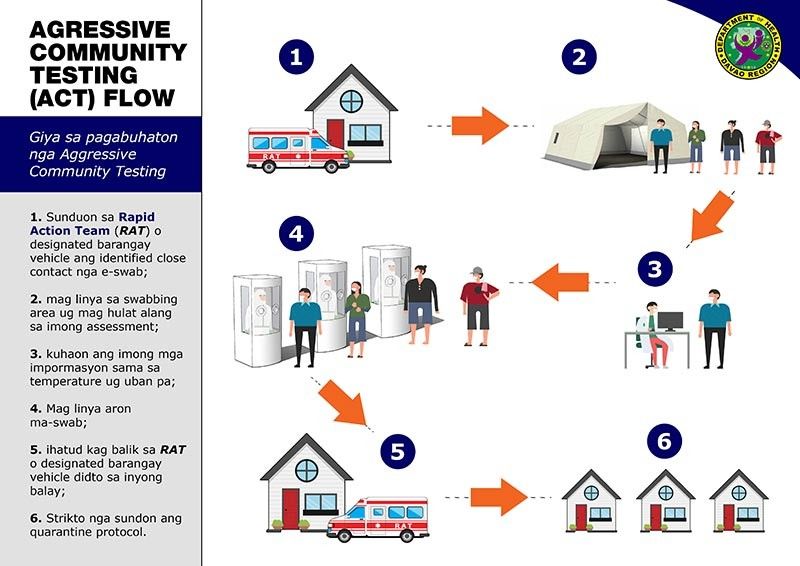 THE Department of Health (DOH) Davao targets to test at least 10,000 individuals in the region under the aggressive community testing (ACT), which is scheduled to start Tuesday, December 1, 2020.

According to Health Undersecretary Dr. Abdullah Dumama Jr., ACT is a rapid and intensive Covid-19 testing done in high prevalent areas and in areas where there was a significant increase of cases in a short period of time.

He added the aim of ACT is for them to immediately contain the spread of the virus and will be done simultaneously in different parts of the country.

With this high number of target testing, Dumama assured everyone that preparations had been done and everything is in place.

He said with more than 2,000 specimens being tested by the Southern Philippines Medical Center (SPMC) on a daily basis, ACT specimens may overwhelm the hospital. They have decided to directly send the ACT specimens to Cebu with an expected turnaround not exceeding 48 hours.

Buenaventura said the testing will begin with personnel of the Rapid Action Team (RAT) or designated barangay vehicle fetching the identified close contact to be swabbed. In the swabbing area, they will line up for assessment, where they will be asked for personal information and where their temperature will be checked. After that, they will be swabbed.

Upon the arrival of the swab tests, all who tested positive will be fetched and will be brought to the available Temporary Treatment Facility (TTMF). Those who are positive but asymptomatic will be in the facility for 10 days. If after 10 days they manifest no symptoms, they will be advised to discontinue isolation and swab testing will not be needed. They will also be tagged as recovered.

Positive patients who manifest mild symptoms will undergo isolation of at least 10 days, including the three days of having no symptoms and are considered clinically recovered. After this, they will be tagged as recovered and no swab tests will be needed.

Positive patients with moderate, severe or critical symptoms will be under isolation for at least 21 days in the hospital until the three days of no symptoms and considered clinically recovered. Only then will they be tagged as recovered and no swab tests will be needed.

If test results came out negative and with no symptoms, at least 14 days of quarantine will be followed. If no symptoms are manifested, medical clearance can be released. If the test result comes negative but the patient manifests symptoms, the patient will have to undergo at least 10 days of isolation until the symptoms disappear for three days.

“Currently, the city has more than 100 TTMF for isolation and quarantine of 1,570- to 2,000-bed capacity. The city is planning to open up more possible quarantine facilities. Hotel isolation facilities to cover were also being identified,” Buenaventura said.

He said they target to test about 1,000 individuals per area.

Simultaneously, areas like Tagum City, Panabo City, two barangays in the Island Garden City of Samal, and Kapalong will also have their ACT from December 2 to 5.