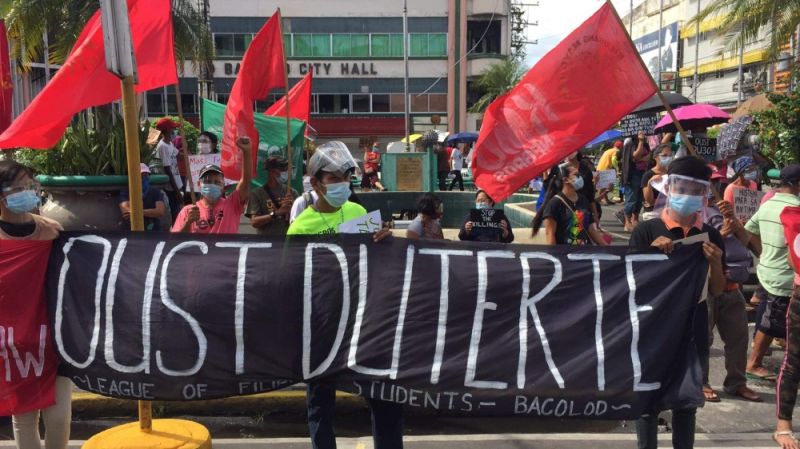 BACOLOD. Various groups under Bayan including Kilusang Mayo Uno- Negros, League of Filipino Students- Bacolod, Anakbayan-Negros and Kadamay-Negros, among others, hold a protest at the Fountain of Justice in Bacolod City in commemoration of the 157th birth anniversary of Andres Bonifacio on November 30, 2020. (Julius Dagatan photo)

NEGROS Occidental-based labor group General Alliance of Workers Associations (Gawa) has reminisced the courage and heroism of Andres Bonifacio, whom it called the "Great Plebeian" and the hero of the common man.

Monday, November 30, was a national public holiday in remembrance of the 157th birth anniversary of Andres Bonifacio, the "Father of the Philippine Revolution."

Wennie Sancho, secretary-general of Gawa, said they consider Bonifacio as a labor leader and organizer of the masses in his quest for equality and social justice against the oppression of the Spanish colonizers.

Sancho said the noble cause espoused by the founder of the Katipunan awakened the revolutionary fervor that led them to manifest their resistance and refusal of allegiance against the Spanish invaders by asserting their willingness to die for the cause of freedom.

"The struggle of the working class initiated by Bonifacio against oppression and exploitation still continue today," he said, adding that "the cause that was raised by Bonifacio in behalf of the poor toiling masses awakened us from lethargy and strengthened our nationalism."

The labor group leader stressed that the spirit of Bonifacio shall lead Filipinos in the quest for social justice, which is an expression of concern for the plight of the oppressed and the downtrodden.

"Today, more than ever we must embrace the ideals of Bonifacio that the beneficiary of social justice should rightly be -- the common man and the so-called plebeians," he added.

Various groups under Bayan including Kilusang Mayo Uno- Negros, League of Filipino Students- Bacolod, Anakbayan-Negros and Kadamay-Negros, among others, held a protest at the Fountain of Justice in Bacolod City Monday.

Aside from the 157th year since Bonifacio was born, the group noted that it was also 124 years since the 1986 revolution that ended Spanish colonization.

Bayan-Negros, in a statement, said Gat Andres Bonifacio rallied the "katipuneros" under the banner of national liberation and against feudal exploitation. They waged a revolutionary war against three centuries of Spanish colonial rule.

It said the current national democratic movement in the Philippines is a descendant of this revolutionary tradition.

"The Filipino people may have defeated our Spanish colonizers, but the victory was usurped by the false benevolence of our American colonizers," it said, adding that "until now, the Philippines' path to progress is hindered by the triage of imperialism, feudalism and bureaucrat capitalism."

Claiming that the Duterte regime has done nothing but perpetuate the ills that plague the nation, the progressive group said the administration continues to be a blatant puppet of imperialist forces.

"Our sovereignty is endangered by this regime's subservience to both the United States and China. It is clear that [President Rodrigo] Duterte and his ilk have turned their backs on the Filipino people and they are spitting at the legacy of Bonifacio," Bayan-Negros said.

The statement further said the country's economic policies and laws only serve to deepen the grip of foreign interests on the nation.

This regime, its said, also continues to be deaf at the demands for a more comprehensive approach toward the pandemic.

Bayan-Negros said the economy has even plummeted toward the worst crisis in Philippine history since World War II. Until now, mass testing and financial aid have yet to be given to the masses.

It said they continue to embody Bonifacio's revolutionary spirit by waging on the national democratic struggle.

The group has also called for national industrialization and genuine land reform.

"Through militant struggle and collective action, Bayan-Negros commits to this task of finishing the 1896 revolution toward genuine democracy and national independence until victory," it added.