Pope elevates 13 new cardinals then puts them in their place 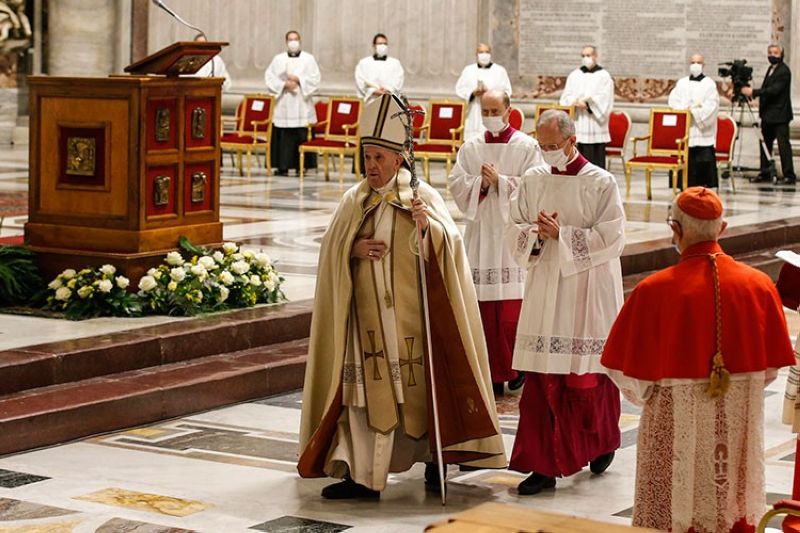 VATICAN. Pope Francis leaves at the end of a consistory ceremony where 13 bishops were elevated to a cardinal's rank in St. Peter’s Basilica at the Vatican, Saturday, November 28, 2020. (AP)

ROME -- Pope Francis raised 13 new cardinals to the highest rank in the Catholic hierarchy Saturday and immediately warned them not to use their titles for corrupt, personal gain, presiding over a ceremony marked from beginning to end by the coronavirus pandemic.

Two new “princes” of the church, from Brunei and the Philippines, didn’t make it to Rome because of Covid-19 travel restrictions, though they were shown on giant screens watching it from home in the nearly empty St. Peter's Basilica. Throughout the socially distanced ceremony, which clocked in at an unusually quick 45 minutes, cardinals new and old wore protective masks.

Most removed their masks when they approached a maskless Francis to receive their red hats, but Cardinal Wilton Gregory, the first African-American cardinal, kept his on. Gregory also was one of the only new cardinals who kept his mask on when the group paid a singing courtesy visit to retired Pope Benedict XVI.

During his homily, Francis warned the new cardinals against falling into corruption or using their new rank for personal advancement, saying that just because they have a new title, “Eminence,” doesn’t mean they should drift from their people.

His comments reflected Francis’ constant complaint about the arrogance of the clerical class, as well as his current battles to fight corruption in the Vatican hierarchy.

“Let’s think of so many types of corruption in the life of the priesthood,” Francis told the new cardinals, deviating from his prepared text. If they think of themselves so grandly, “you won’t be pastors close to the people, you’ll just be ‘Eminence.’ And if you feel this way, you’ll have strayed off the road," the pope warned.

The ceremony, known as a consistory, is the seventh of Francis’ pontificate and once again reflected the Argentine pope’s effort to name cardinals from places that have never had them before or whose service to the church he wants to highlight. Nine are under age 80 and eligible to vote in a conclave to elect a new pope, further solidifying the majority of Francis-appointed, voting-age prelates in the College of Cardinals.

Gregory, the new archbishop of Washington, told The Associated Press ahead of the ceremony that he viewed his appointment as “an affirmation of Black Catholics in the United States, the heritage of faith and fidelity that we represent.”

Gregory’s appointment comes after a year of racial protests in the US sparked by the latest killing of a Black man by a white police officer. Francis has endorsed the protests and cited the American history of racial injustices.

"There is awareness now of the need for racial reconciliation, an awareness that I have not seen at this level and at this intensity before," Gregory said.

Another social justice-minded cardinal is the retired archbishop of Chiapas, Mexico, Cardinal Felipe Arizmendi Esquivel, who has championed the rights of Mexico’s indigenous peoples and spearheaded efforts to translate the Bible and liturgical texts into native languages.

Francis visited Chiapas in 2016 and has long championed the rights of indigenous peoples. “That could be one of the reasons (he made me a cardinal) but I can’t confirm it,” Esquivel said during a Zoom call.

The Vatican's in-house theologian-preacher, Cardinal Raniero Cantalamessa, also got a red hat, but he successfully argued against being made a bishop as well, saying at his age - 86 - he couldn't take on the responsibility. He also eschewed a red cassock for Saturday's ceremony, using instead his brown hooded friar's robes covered with a white “rochet" vestment.

After the ceremony, Francis and the new cardinals paid a visit to Benedict, who lives across the Vatican gardens in a converted monastery. Francis, again sans mask, greeted his predecessor warmly. The cardinals greeted Benedict, kissed his hand and sang a prayer as the retired pope, who is 93 and frail, listened. Only Gregory and one other new cardinal kept his mask on during the encounter.

The ceremony took place against the backdrop of the Covid-19 pandemic, which erupted in Italy in February and has seen a resurgence this fall. The Vatican is under a modified lockdown, with the Vatican Museums shuttered and Francis' public general audiences cancelled. Instead he holds them in private, livestreamed.

The cardinal candidates and others who came to Rome from afar for Saturday’s service were required to undergo 10 days of Vatican-mandated quarantine at the pope’s hotel, where meals were brought to their rooms.

Usually, consistories are full of parties and crowds, with days of receptions, Masses and dinners for the new cardinals and their friends. The consistory itself is normally followed by “courtesy visits,” where the new cardinals greet well-wishers and the general public from the grandeur of their own reception rooms in the Apostolic Palace or Vatican auditorium. This year, there were no courtesy visits, and each cardinal was given a 10-guest limit.

With Saturday’s new cardinals, Francis has named 73 of the 128 voting-age cardinals, compared to 39 for Pope Benedict XVI and 16 for St. John Paul II. While the outcome of a future conclave can never be predicted, it’s not a stretch to suggest that a hefty majority of today’s electors presumably share the pastoral and doctrinal attitudes of the pope who named them.

The geographical makeup of the College of Cardinals has also shifted under Francis away from Europe, though Europe remains the greatest voting bloc with 53 electors. The Americas - North, Central and South and the Caribbean - together have 37 cardinal electors, even though an estimated 40 percent of the worlds Catholics live in Latin America and the Caribbean.

Francis has continued the trend of naming cardinals from the "peripheries" of the Catholic Church: Brunei got its first-ever cardinal with the Vatican’s ambassador to the country, Cardinal Cornelius Sim.

Rwanda also got its only cardinal with the archbishop of Kigali, Antoine Kambanda, whose family was slaughtered during the Rwandan genocide. Kambanda made the trip to Rome for the ceremony, Sim stayed home due to Covid-19 restrictions.

History’s first Jesuit pope has also increased the number of cardinals who belong to religious orders, naming three Franciscans this time around in a year in which the pope, who named himself after St. Francis of Assisi, released an encyclical inspired by the saint’s call to fraternity and solidarity with the weakest. (AP)