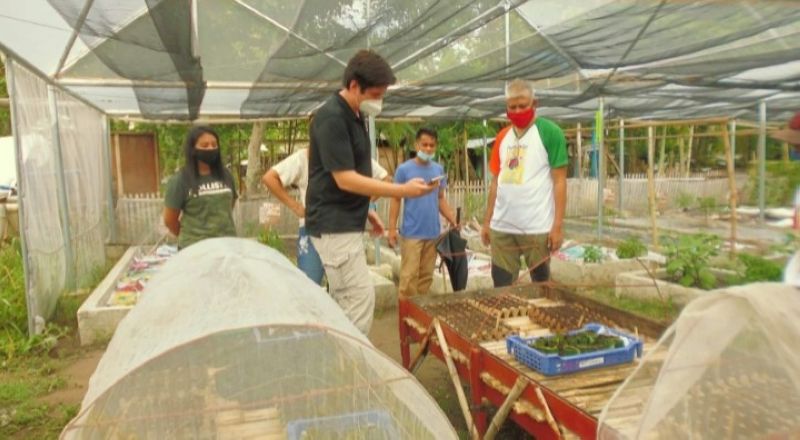 NEGROS. Multi-awarded Negrense integrated and organic farmer Jesus Antonio "Jet" Orbida (right), who now sits as the new director of the National Organic Agriculture Board (NOAB) representing small farmers in the Visayas, with Negros Occidental Board Member Ryan Gamboa (left) in an ecotour at the PeacePond in Barangay Enclaro, Binalbagan town earlier this year. (Contributed photo)

Orbida said the PGS will enable them, small farmers, to certify their produce as organically grown in line with Dar's challenge for organic farming to be sustainable particularly for the small farmers.

"The certification has been a major hindrance. Some farmers are moving back from going organic because their products cannot be labeled as organic," he said, adding that farmers have to spend P100,000 to P130,000 per product for organic certification.

The multi-awarded farmer is the president of PeacePond Farmers Association that runs a less than five-hectare farm and fish production area at Barangay Enclaro in Binalbagan town promoting integrated and diversified farming.

In November 2019, he was awarded as finalist in the National Organic Agriculture Achievers Award (NOAAA) small farmer (individual) category.

In September of the same year, Orbida received the award for the same category in the 2019 Regional Organic Agriculture Achievers Awards (ROAAA) in Iloilo City.

Also in 2018, he was recognized by the Provincial Government of Negros Occidental for coconut and integrated farming during the 2nd Food Production Heroes Assembly.

Being the only DOT-accredited tourism establishment in Binalbagan, PeacePond practices agroforestry by intercropping other farm produce between coconut trees.

Through the Blastik or the Balik Plastic Bottle Project, which is a full-circle plastic bottle collection and recycling program, the group hopes to teach public and private sector groups on how to lessen the plastic footprint among communities.

Among the latest recognition of Orbida is being the 2019 Outstanding Negrosanon for organic farming given by the Provincial Government of Negros Occidental during the commemoration of Al Cinco de Noviembre.

As he represents the Visayas small farmers in the NOAB from 2020 to 2023, Orbida said he will also push for the Organic Sugar Resolution initially pushed by Provincial Agriculturist Japhet Masculino and former NOAB Director Pastor Jerry Dionson, who is so a multi-awarded Negrense farmer.

He said the pending NOAB resolution which was presented during the Organic Agriculture Congress in 2019 requests the Sugar Regulatory Administration (SRA) to have a separate sugar classification for organic sugar.

"We will continue to advocate for this resolution to be considered for future amendments in the Organic Agriculture Law," Orbida said.

Also, the new NOAB director underscored that seed sourcing is a major issue when it comes to organic farming.

"We want to enhance seed banking practices to assure the future generation of farmers of quality seeds and avoid dependency on imported and genetically-modified organism (GMO) seeds," he added.