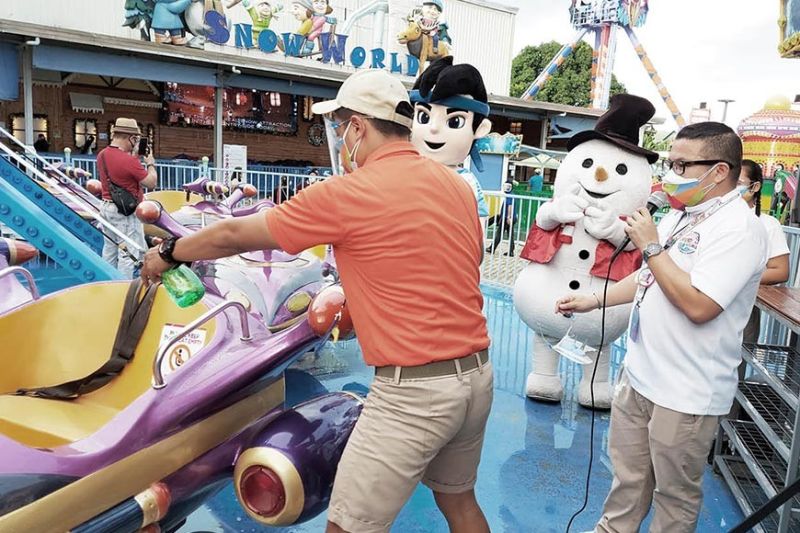 ANJO World, an amusement park located in Minglanilla, has seen a spike in the number of visitors since last month.

This happened after the Inter-Agency Task Force for the Management of Emerging Infectious Diseases lifted the age restrictions for visitors in November.

“We have been quite surprised with the result of Cebu Gov. Gwendolyn Garcia’s initiative to revive the whole tourism industry. After she announced the lifting of age restrictions, the traffic really tripled compared to when we opened on Sept. 11,” said Belmont One president Chester Lim.

Every week since then, Lim said, the numbers increased.

“We’re looking at about 70 percent of the volume we had last year,” he said. “We are confident that people will start to go out now, especially during the Christmas season.”

As economic activities have slowly resumed in many parts of Cebu, Anjo World is among those that implemented strict health and safety measures especially since the facility is a crowd drawer.

“The virus scare is still present. But we are making sure that the park is kept safe, clean and disinfected for both guests and our team members. We also make it a point to be at par with international amusement standards when it comes to guests’ safety,” said Cedric Reyes, head of sales, marketing and press relations.

As it celebrates its first anniversary, the company is optimistic on future prospects for Cebu’s amusement tourism sector.

“We are always improving our customer service to bring world-class experience to all our guests, acquire more mid-way games and introduce new entertainment inside the park,” Reyes said.

As one of the anniversary highlights, Anjo World’s Snow World Cebu, which is considered the first winter attraction in the Visayas and Mindanao, is introducing a new theme this year, the “Snow Village,” which features colorful gingerbread houses.

“This will be another treat for all families during this Christmas season,” said Lim.

Lim also announced that the Anjo World management has recently inked a partnership with MyBus to give the public safe and easy access to the park.

“We are very excited as this will bring more guests to Anjo World via a clean and safe mode of transportation. MyBus will be starting soon here at Belmont One Complex,” he said. (JOB)