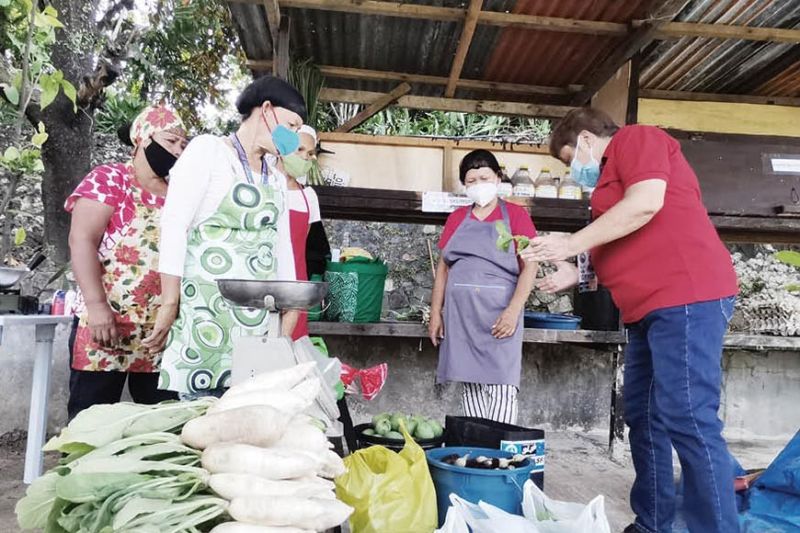 TABO. To help generate income for the 15 residents of Barangay Jagobiao, Mandaue City, Cenapro Chemical Corp. lends its lot to be used for urban gardening and selling of the harvested crops. (KATE F. DENOLANG)

AFTER two months of urban gardening, residents in Brgy. Jagobiao, Mandaue City will harvest and sell the vegetables they have grown.

This, after the Mandaue City Agriculture Office tapped Cenapro Chemical Corp. to lend its 600-square-meter lot to the 15 residents of Barangay Jagobiao to advocate urban gardening for extra income and food supply.

In an interview, Cenapro chief executive officer Amado Go said they advocate urban gardening and they also want to help the Jagobiao volunteer residents who sow and grow the plants.

The volunteers have undergone and graduated from livelihood training in urban gardening by the City Agriculture, and had their first harvest on Nov. 30, 2020.

The resident volunteers have allotted three hours per day to take good care of the vegetables such as eggplant, upo, kangkong, lettuce, cucumber, and green chili.

Carina Limoran, one of the volunteers, said urban gardening has given them hope during the pandemic as it has helped augment income and provide them with food supply for their families.

She said that during the growing stage, Go would give them food baskets every week with a variety of vegetables and fruits worth a week’s supply.

This serves as their salary while the plants could not be harvested yet.

Now on their first harvest, Go said, all the profit that will be generated from the harvest will be divided among the 15 volunteer residents.

Go told SunStar Cebu that the lot was actually intended for a commercial building, however, due to the pandemic, it was temporarily used for urban gardening.

Thus, they have planned to have a “tabo” of all their fresh harvests at the same price as the market price once a week, said Go.

The “tabo” will be held inside Cenapro, where the urban garden is located.

Aside from urban gardening, Go is also into integrated farming through which he raises goats and chickens.

In the same interview, Grace Go, the head of the Mandaue City Agriculture Office, said they started this project during their meeting with the members of the Mandaue Chamber of Commerce and Industry (MCCI) to advocate urban gardening.

Two companies lent a lot for urban gardening and one company built an urban garden on a rooftop.

Grace urged other commercial companies that own lots that have been idle due to the pandemic, to temporarily use it for urban gardening. (KFD)