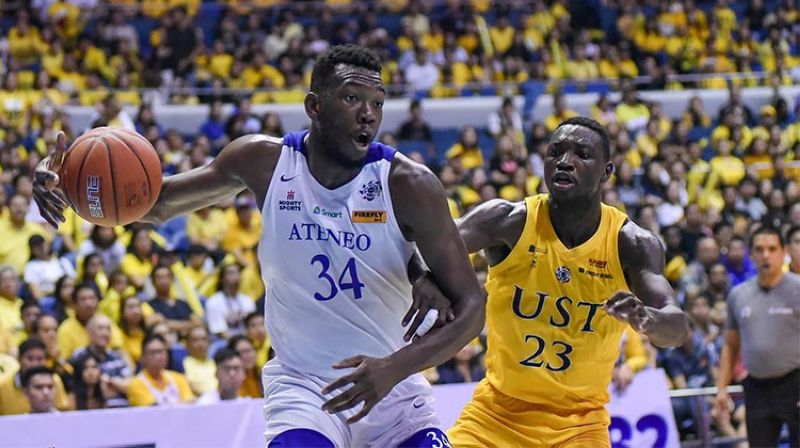 MANILA. Ateneo ace Angelo Kouame took a step closer to becoming a naturalized Filipino after House Bill 5951 was approved by the House committee on justice. (The UAAP)

THE Gilas Pilipinas men’s national basketball team moved closer to having a brand new naturalized Filipino in their fold after the Justice Committee of the House of Representatives gave the thumbs-up to House Bill 5951, which looks to grant Filipino citizenship to the big man from the Ivory Coast.

The bill, which was principally authored by Deputy Speaker and Samahang Basketbol ng Pilipinas (SBP) vice-chairman Robbie Puno, is looking to turn Angelo Kouame into a naturalized player for the Gilas Pilipinas and assume the role that former NBA player Andray Blatche once had for the national team.

"It's a really good opportunity sa akin kasi I wouldn't have even expected this. I'm grateful to represent the country and despite the fact that I came from Africa, I'm doing it for my family also," Kouame was quoted as saying in his testimonial on the online hearing.

Puno also expressed his gratitude for the support that was shown by his colleagues as Kouame moves closer to playing for Gilas in the third window of the 2021 FIBA Asia Cup qualifiers in February 2021.

"I am thankful that my colleagues in the House of Representatives recognize the potential Mr. Kouame, who gave a stunning performance in the 82nd Season of the UAAP, can bring to our national team as they prepare to compete in the 2023 Fiba World Cup," said Puno.

"He’s just turning 23 years old before the end of the year, but no one can doubt the immense talent of Mr. Kouame, as shown in the recent 16-0 sweep of the Ateneo Blue Eagles in the recent UAAP season. I am hopeful that he will bring the same level of intensity as a member of Gilas Pilipinas. We just need to provide him with better opportunities to defend the Philippines internationally," Puno added.

Kouame, who stands 6-foot-10, has been Ateneo’s sentinel over the last two seasons. After winning Rookie of the Year honors in 2018, Kouame kept the momentum up and helped steer the Blue Eagles to yet another UAAP title in 2019, with averages of 12.5 points, 14 rebounds, and 5.5 blocks.

"Gilas Pilipinas is in need of a new breed of players, and I am hopeful that we will be able to include Mr. Kouame to their roster. But of course, we need more like him to ensure not only an exciting start but more importantly a strong finish in the next FIBA World Cup," Puno said.

The next step of Kouame’s naturalization process is the House of Representatives where congressmen will cast their vote on the matter. (JNP)