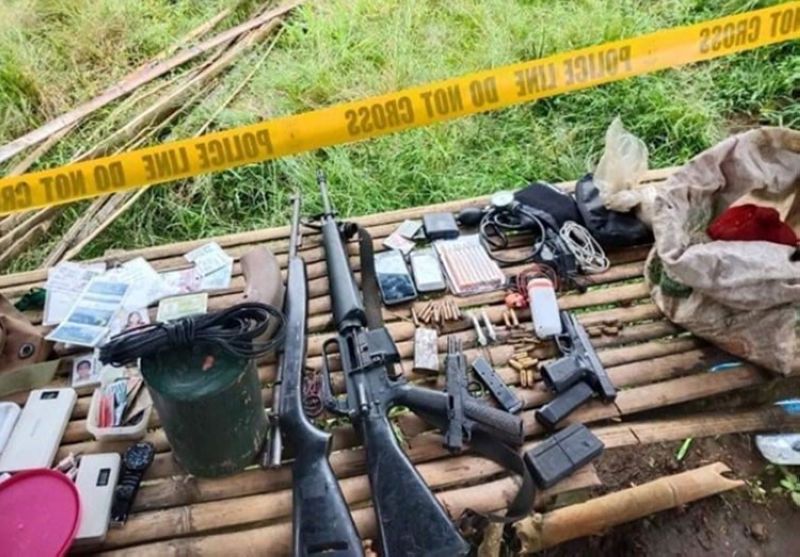 ZAMBOANGA. Troops kill in a clash a ranking leader of the communist New People's Army (NPA) in a law enforcement operation Wednesday, December 2, in Lake Sebu, South Cotabato. A photo handout shows the high-powered guns and explosives the troops recover from the hideout of the slain rebels. (SunStar Zamboanga)

Vinluan said the slain followers of Libron include his wife, Merly and three others who were later identified Rogelio Magsaya alias Sarge, a certain Macoy, and a certain Megan.

Vinluan said the firefight ensued as Libron and his followers "pulled their guns and fired," prompting the arriving joint forces of the Army's 5th Special Forces Battalion and 2nd Provincial Mobile Force Company to return fire.

"Based on the report from the ground, Libron's group was tagged in recent bombings of buses, construction equipment, and business establishments in central Mindanao whose owners refused to shell out 'protection money' on a periodic basis," Vinluan said.

The Westmincom chief said that Libron is also wanted for heinous offenses, including multiple murder, extortion and arson.

Galido said the recovered firearms were turned over to the Lake Sebu Municipal Police Station for proper disposition.

Uy directed the troops of the 5th Special Forces Battalion to heighten security against possible retaliation of the NPA.

"We continue to beef up our military and joint operations to let peace and progress reign in central Mindanao," Uy added. (SunStar Zamboanga)