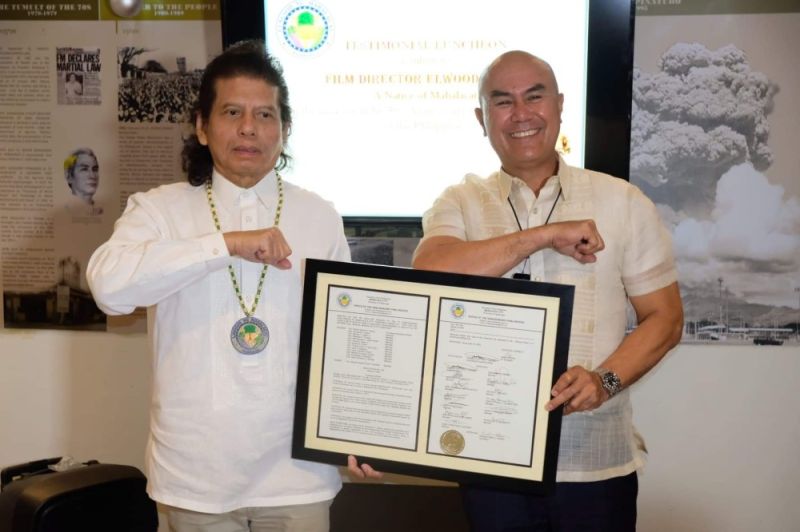 HONORS. Mabalacat City Mayor Cris Garbo handed over to Director Elwood Perez a plaque of recognition after the city honored his 50th year in the industry. (Mabalacat CIO)

Perez, popularly known as “El Maestro” who is a native of this city, was given recognition both by the Pampanga Provincial Government and Mabalacat City Government for his valuable contribution to the movie industry. The tribute also coincided with the celebration of his 75th birthday.

Mayor Crisostomo Garbo handed over a plaque from the city government, citing his remarkable achievements as a film director and his significant contributions to arts, particularly in film making during a solemn event held in Clark Freeport.

Pampanga Senior Board Member Cherry Manalo also presented the province's plaque of recognition to Perez. She was joined by Board Members Benny Jocson, Fritzie David and Nelson Calara.

“We are very proud of you. We join each Mabalaqueño in celebrating your work as film director as you are recognized here and abroad. The city government of Mabalacat and the province of Pampanga honor all people like you who contribute to the arts as you bring pride to all of us,” Garbo said in his speech.

Perez expressed elation over the honor and recognition that he received from the Provincial Government of Pampanga and the Mabalacat City Government.

“You did not make my day, month or year but you made my life with this honor and recognition. Thank you to Mabalacat and Pampanga officials,” Perez said.

Perez is a multi-awarded filmmaker, director, writer, showbiz legend, and a native of Barangay San Francisco, Mabalacat City. He started making movies in 1970 together with Lino Brocka, Ishmael Bernal and Celso Ad Castillo.

He has also directed the country’s top celebrities including Nora Aunor, Vilma Santos, Amalia Fuentes, Rio Locsin, and a host of others.