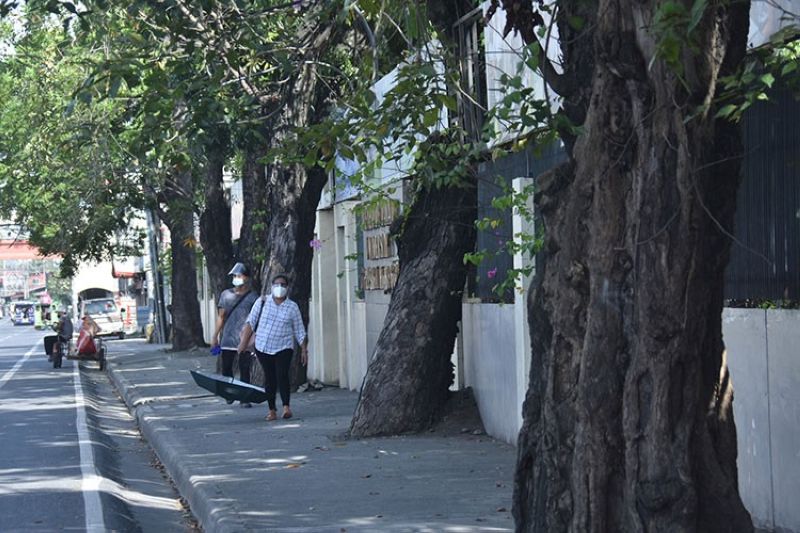 A DAVAO City councilor is lobbying to prohibit the cutting of heritage trees within the urban areas of the city.

Councilor Diosdado Mahipus Jr., in his privilege speech on Tuesday, December 1, proposed for the enactment of an ordinance regulating, if not prohibiting, the cutting of old trees in the city.

The proposal of Mahipus, who heads the committee on environment, came after the recent protest of some environmental groups who are calling the Department of Public Works and Highways (DPWH) Davao City District Engineer's Office to spare the eight trees planted along the sidewalk of Ateneo de Davao University (AdDU) Grade school/High school Matina campus from being cut down.

On Thursday, November 26, Ecoteneo and the Interfacing Development Interventions for Sustainability (Idis) sent a letter of concern to Engr. Richard Ragasa of the City District Engineering Office after learning that eight old trees, mostly Narras, are planned to be cut to give way to the laybay or road widening plan discussed between AdDU and the DPWH two weeks ago.

In a recent SunStar Davao report, it was revealed that the proposed cutting down of the trees is part of the proposed 405-meter Ma-a Junction flyover project along McArthur highway that may potentially result in road widening and other road improvements.

"While indeed we acknowledge the continuing traffic congestion in some parts of the city, it must be stressed however, that road width is not the only factor causing traffic congestions. It is already a fact that the volume of motor vehicles being put out and allowed on our streets is also a factor. For this representation, road widening alone is eventually of minimal effect if motor vehicles on our roads also exponentially increase overtime as well," Mahipus said in his speech.

The councilor also said that DPWH should have already been aware that the city, in the previous instances, had been opposing the cutting of trees in infrastructure developments.

He also cited Mayor Sara Duterte-Carpio's recent statement that this project must provide engineering solutions in such a way that even if the project pushes through, the trees should remain there.

Duterte-Carpio said in a recent interview that the city had been advocating the preservation of the environment by planting more trees.

With this, Mahipus said this is also the shared sentiment of the City Council.

He also called on DPWH to abate and prevent the cutting of trees in infrastructure developments in the city through the introduction of engineering solutions, as mentioned by the city mayor, and abide by the existing city environmental protection policy.

In August 2019, Mahipus led an investigation on the cutting down of 150 trees by DPWH to give way to the drainage and revetment project near Ma-a riverbanks.

During an environmental committee hearing organized, his committee discovered the project did not undergo proper consultation with the city government despite securing a permit from DENR.

Meanwhile, he said there is a need to introduce alternative modes of transportation, and encourage people not to rely on cars in their short distance travels.

He said there is also a need to have wider sidewalks, sidewalks with protective barriers, and "a network of tree-shaded walkways," which is already included in the proposed Comprehensive Land Use Plan (Clup).

He added that his committee is in coordination with the committee on public works, headed by Councilor Edgard Ibuyan Jr., and already conducted hearings on the latter's proposed "tree line ordinance" where the planting of trees will be included in the project design of road developments in the City.

In a previous SunStar Davao story published on November 11, 2019, Interfacing Development Interventions for Sustainability (Idis) executive director Chinkie Peliño-Golle said the group had long been lobbying for a "Heritage Tree Ordinance," wherein the city will be doing an inventory of all existing old trees in the urban areas and preserve it.

This comes after trees planted at Clifford Park, an island fronting Davao City Central Post Office, were also cut down to give way to the Clifford Freedom Park Development Plan.

This move by the government drew negative comments from environmental groups and netizens.

Duterte-Carpio apologized to the public shortly after and committed to "carrying out more programs to establish rural and urban green spaces, promote ecological balance, sustainable utilization and management of resources, and to continue raising public awareness of the importance of environmental protection."

Peliño-Golle, in the case of the trees in Addu, urged the local council to intervene.

"We urge the City Council members to act on this because this is a relevant issue. We know that all the projects also have to secure the resolution of no objection so they should start working on the development of a policy that will regulate the continuous urban deforestation," she said.

Peliño-Golle said the City must craft a policy in preserving these trees, especially that continuous effects brought about climate change call for it.