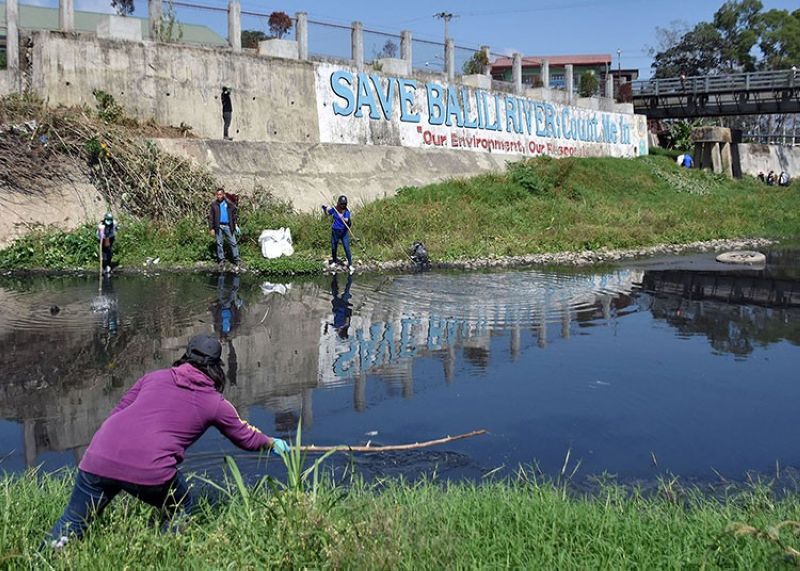 MITIGATION. Volunteers participate in the Balili river clean-up earlier this year. In a bid to prevent flooding, La Trinidad officials sought the help of ACT-CIS Partylist and Benguet Caretaker Eric Go Yap to fund the construction and improvement of the flood control of the Balili River from Kilometer 3 to Kilometer 6. (Redjie Melvic Cawis)

TO PROTECT life, property, and crops of farmers from further damage, officials of La Trinidad in Benguet requested ACT-CIS Partylist and Benguet Caretaker Eric Go Yap to fund the construction and improvement of the flood control of the Balili River from Kilometer 3 to Kilometer 6.

During the regular session of Municipal Council on Tuesday, December 1, approved was the proposed resolution of Councilors Arthur Shontogan, John Botiwey, Teddy Walang, and Renato Tereng asking Yap to allocate P100 million for the realization of the project.

Officials said that during rainy season, the river becomes flood hazard zone, wherein major water tributary overflows affecting farmers nearby and about 1,000 families evacuate due to the possible occurrence of flash flood and soil erosion.

Considering the town has a limited fund, the officials sought the help of Yap.

"The put-up of flood control structures in critical point of the Balili River particularly Km. 3 to Km. 6 will consider as a measure for the protection of life, property and crops of farmers such as cutflowers, strawberries, and highland vegetables from further damage," the resolution stated.

A copy of the resolution will be forwarded to the office of Yap and Mayor Romeo Salda for information.

In 2017, flooding during the onslaught of heavy rains had been one of the major problems of La Trinidad, with the council also requesting to President Rodrigo Duterte for a P100-million allocation for Balili River Flood Control Project.

In January this year, officials also asked for the aid of Senator Christopher Go for the allocation of P50 million for flood control systems and road pavements for the town.

The Balili river, considered a major body of water that covers three major cities and provinces in Northern Luzon with main tributary, runs for at least 24 kilometers and 23 tributary creeks within Baguio City and flows to Benguet towns of La Trinidad and Sablan before going to the province of La Union.