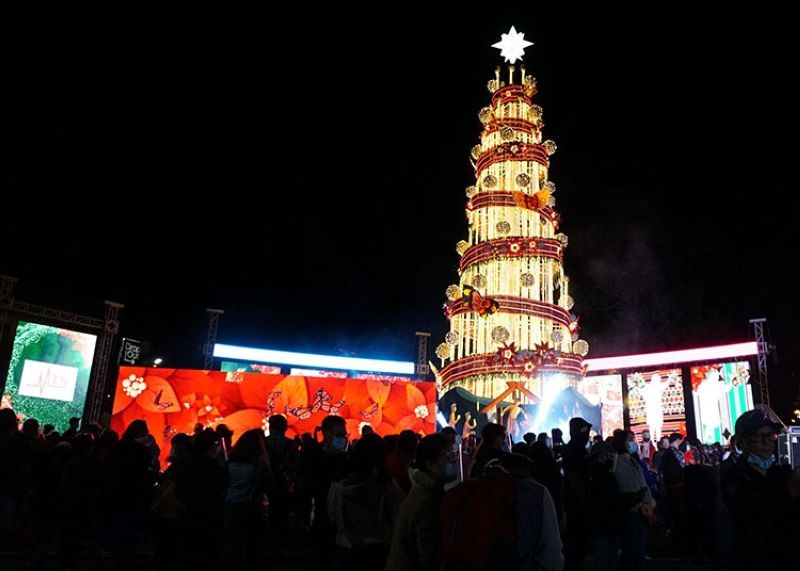 ULOY ANG PASKO SA BAGUIO. A throng of crowd gathers after the Christmas tree lighting ceremony on December 1 at Session Road. Addressing the apparent breach in health and safety protocols during the program, which attracted a sizeable crowd, Baguio City Mayor Benjamin Magalong said he is taking full responsibility for the incident. (Roderick Osis) 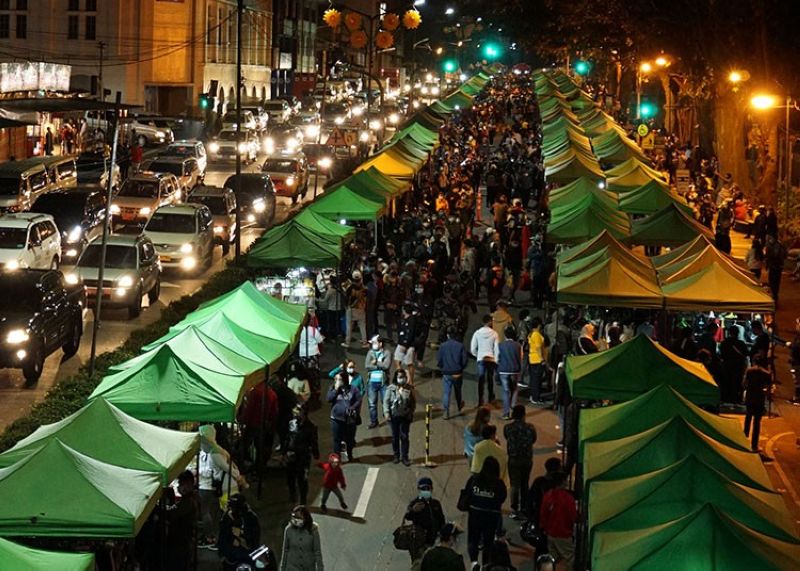 OPEN, CLOSE. Operation of the night market, which reopened December 1, was suspended after apparent lapses in crowd control. The city will immediately organize a meeting and conduct a post-night market assessment to evaluate the incident. (Roderick Osis)

A NUMBER of people welcomed the opening of the Yuletide celebration in Baguio City while the resumption of the Harrison Road night market was suspended a few hours after.

The Yuletide celebration in the city officially began December 1, with the lighting of the Christmas tree at the Session Road rotunda at 6 p.m. Tuesday.

Mayor Benjie Magalong, in his message during the program, said that while the city gets into the spirit of the season, it will strive to make the celebration safe and healthy, noting the coronavirus disease (Covid-19) pandemic.

"We will do it for one reason and that is because we love our family, our close friends, our neighbors, our city and all those coming to celebrate with us," he said.

Addressing the apparent breach in health and safety protocols during the program, which attracted a sizeable crowd, the mayor said he is taking full responsibility for the incident.

"It is unfortunate but please do not blame anyone other than me as your mayor," he said.

He said the city's celebration will be guided by the Covid-19 safety protocols issued by the National Government and this will include prohibitions on some traditional activities like caroling and family and clan reunions.

Simbang Gabi will be allowed but with limitations, he said.

After a night, Magalong suspended the operation of the night market, which reopened December 1, after lapses in crowd control.

"Around 800 to 900 of whom andun sa rotunda, the rest along the stretch of Session Road. No citation or tickets were issued although admittedly at the start, medyo kumpul kumpul ang mga tao but when reminded, parang naging mga recruit nga. They formed orderly lines and kept their distance from each other the rest of the event," Co said.

Co said the night market scene was similar, admitting there was a surge in crowd.

"Sa night market, admittedly, there was a surge and there were times na nagka dikit dikit talaga ang mga tao, although no violators were apprehended but what was done was people were continuously reminded to observe distancing," Co added.

Magalong directed City Treasurer Alex Cabarrubias and market superintendent Fernando Ragma Jr. to immediately organize a meeting and conduct a post-night market assessment to evaluate the incident in a bid to identify weak points and vulnerabilities and discuss solutions.

"We were also banking on the discipline of our people but sadly it is obvious that it is not enough and so needs more work and review of the guidelines and protocols to be implemented and changes should be made if ever the night market will be allowed to open again," the police chief said.

There are over 1,000 vendors displaced when the night market closed due to the health pandemic.