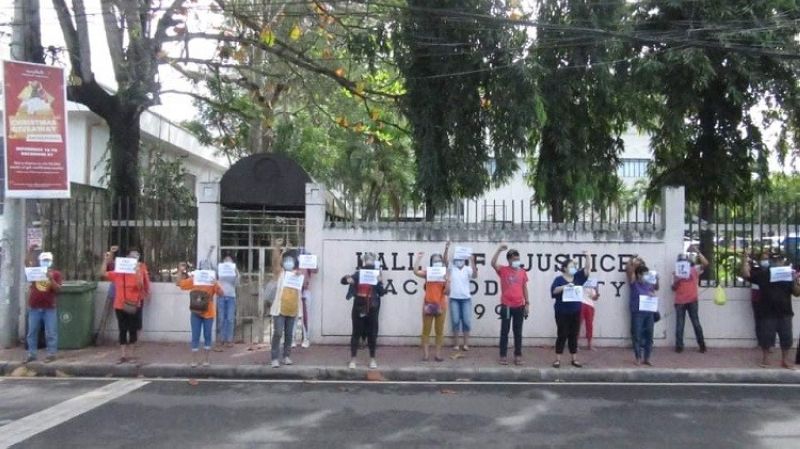 BACOLOD. Bannering the call for the immediate release of political prisoners in the country, Some members of human rights groups in Negros Occidental hold a silent protest outside the Hall of Justice along Gatuslao Street in Bacolod City on Thursday. (Julius Dagatan photo)

SOME members of human rights groups in Negros Occidental staged a silent protest outside the Hall of Justice along Gatuslao Street in Bacolod City Thursday, December 3, 2020, to call for the immediate release of political prisoners in the country.

Karapatan-Negros Secretary-General Clarizza Singson, in a statement, said amid the alleged environment of extreme political persecution and criminal negligence of the Duterte regime, political prisoners in the Philippines continue to languish in jails because of trumped-up charges, political harassment and criminalization of political dissent.

Singson claimed that in Negros alone, there are 94 political prisoners currently accounted for in different jails of the island, all of them arrested under the present administration.

"These political prisoners were victims of trumped-up charges as the island was subjected and turned into a laboratory of fabricated charges orchestrated by this fascist and tyrannical administration against its opposition, critics and activists," she added.

In the two years of the implementation of Memorandum 32 and the formation of the National Task Force to End Local Communist Armed Conflict (NTF-ELCAC) through Executive Order No. 70, the group said it documented hundreds of illegal arrests on the island.

Karapatan-Negros recalled the simultaneous raids of Bagong Alyansang Makabayan, Kilusang Mayo Uno, Gabriela and National Federation of Sugar Workers offices in Bacolod City and Escalante City in October 2019, which led to the arrests of 57 activists.

It said the search warrants were carried out through "defective and malicious search warrants" issued by Regional Trial Court Branch 89 in Quezon City.

The statement further said, "this modus operandi was also mustered by the then Police Regional Office - Central Visayas Director through Oplan Sauron 1 and 2 that not only arrested farmers and activists but killed six from Guihulngan in December 2018 and 14 in Canlaon in March 2019."

Singson said all these executive orders accompanied by the ploy of red-tagging or maliciously linking activists to proscribed organizations like the Communist Party of the Philippines and New People's Army have triggered mass arrests and worsening rights violations including outright extrajudicial killings and enforced disappearances of human rights activists.

In this time of strict implementation of community lockdown, Karapatan-Negros believed that political prisoners suffer from the truest sense of an Enhanced Community Quarantine as their visitation rights were suspended due to the coronavirus disease (Covid-19) pandemic.

Its secretary-general said it is the time to call for their immediate release most especially the elderly, sick and pregnant women the likes of Nona Espinosa who are the most vulnerable in this life-threatening pandemic.

"Learning from the lesson of Reina Mae Nasino's case, we call that Nona will be given necessary and adequate medical care as well as her right to give nourishment to her baby as soon as she gave birth expectedly this week," Singson said, adding that "we don't want another Baby River, killed by this cruel system."

Karapatan-Negros considers the "severe condition of the country's political prisoners" as heartbreaking and enraging.

It said Karina Dela Cerna, the youngest political prisoner in the country as she was only 18 years old when she was arrested during the so-called "Negros Crackdown" in 2019, is one of the example of how red-tagging and baiting can lead to the filing of fabricated charges and arrests of known activists and critics of the administration.

"We demand an urgent response from the Duterte administration as the pandemic worsens and his government's criminal neglect amid the pandemic and calamities, political prisoners in the country continue to languish in jails of their depraved condition threatening their health and life inside the prison cells," the Karapatan official stressed.