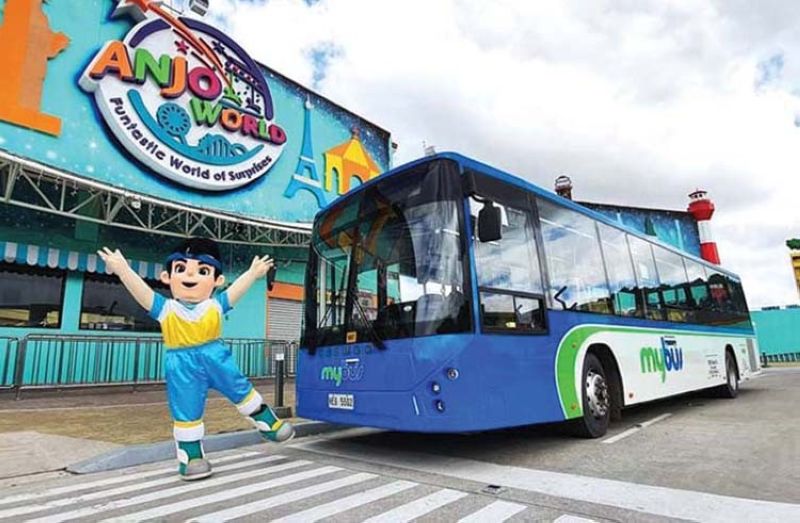 RIDE. Anjo World has recently inked a partnership with MyBus to give more easy transportation access to the premier amusement destination. / ANJO WORLD

ANJO World, owned and operated by Belmont One, is marking its first anniversary since it brought world-class amusement tourism to Cebu.

To mark this significant milestone of the company, Cebu’s premiere amusement park, located at the Belmont One Commercial Complex in Barangay Calajoan in Minglanilla town, is treating some 300 orphans from four orphanages to free rides at Anjo World.

“We have invited 300 orphans this year, as we want them to enjoy the park amid the pandemic. We want them to know that Anjo World will always be here for them,” said Chester Lim, president of Anjo World.

As economic activities have slowly resumed in many parts of Cebu, Anjo World is among those that have since reopened with health and safety measures in place.

“The virus scare is still present,” said Cedric Reyes, head of sales, marketing and press relations. “But we are making sure that the park is kept safe, clean and disinfected for both guests and our team members. We also make it a point to be at par with international amusement standards when it comes to guests’ safety.”

As one of the anniversary highlights, Anjo World’s Snow World Cebu, which is considered the first winter attraction in the VIsayas and Mindanao region, is introducing a new theme this year, the “Snow Village,” which features colorful gingerbread houses.

The company president also announced that Anjo World management has recently inked a partnership with MyBus to give more easy transportation access to the premier amusement destination.

“We are very excited as this will bring more guests to Anjo World in a clean and safe mode of transportation. MyBus will be starting soon here at Belmont One Complex,” Lim said.