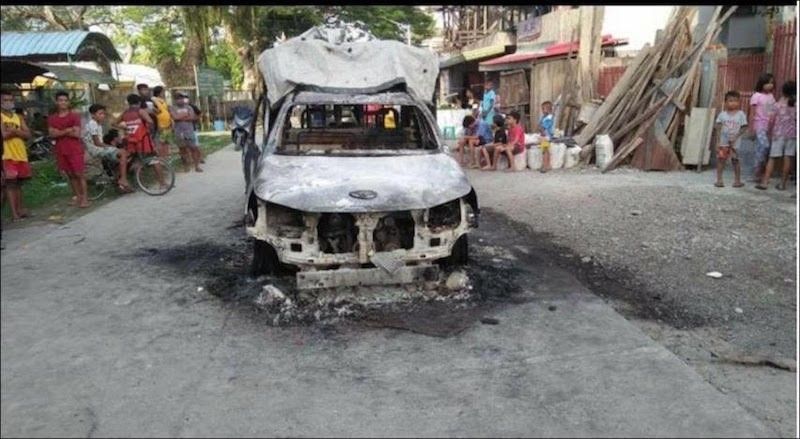 MAGUINDANAO. Armed men from the Bangsamoro Islamic Freedom Fighters and Dawlah Islamiya attack a police station and an Army patrol base, and torch a police car in Datu Piang, Maguindanao on December 3, 2020. (PNP)

Citing initial information gathered from the troops, Atilano said Police Captain Israel Bayona and his men were on board the police car, but abandoned it after learning that the armed men had targeted them.

The police car was abandoned near the patrol base of the 6th IB, which was manned by four soldiers.

(Four soldiers were manning this. They tried to repel the 30 armed men from BIFF and Dawlah Islamiya. The police abandoned their vehicle and hid in a safer place.)

The four soldiers were able to call for reinforcement, which immediately arrived, thus, preventing the rebels from proceeding further into the town.

Around 50 armed men from BIFF and Dawlah Islamiya descended on Poblacion, Datu Piang at around 10:30 p.m. Thursday.

One group attacked the police station and torched a police car while the other group “harassed” the Charlie Company of the Philippine Army’s 6th Infantry Battalion, Atilano.

The terrorists fled in boats in the Liguasan Marsh.

No casualty was reported on the government side during the incident.

Citing reports, Atilano said Bayona was involved in a conflict with some people who have relatives in the BIFF.

He allayed fears of residents and said the incident cannot be compared to the Marawi siege.

Atilano said the BIFF and Dawlah Islamiya fighters did not target the residents. None of the houses were hit during the gunfight.

He said the attackers had targeted Bayona only.

"Even another Marawi is highly improbable at this point in time. Because we have already learned the lessons of Marawi and we can consider what happened in Datu Piang as an isolated case and it is really far from another Marawi incident," he said. (Third Anne Peralta-Malonzo / SunStar Philippines)